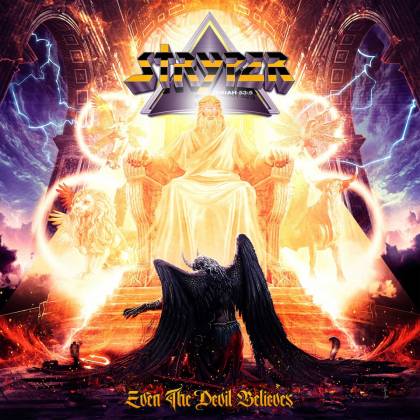 Even The Devil Believes

As THE DAMNED memorably put it back in 1979: "religion doesn't mean a thing/it's just another way to be right-wing". Not that the STRYPER album is full of paeans to Mike Pence, of course. Always a much better band than their vexed reputation would suggest, the Orange County crew made a handful of great records in the '80s and generally avoided being laughed out of town by being a reliably over-the-top live band, and, if we're honest, a bit of a novelty. Unfortunately, even several decades later, nothing quite takes the edge off a heavy metal record like constant references to God's love and the power of prayer. At least with STRYPER, you know it's coming, but it's still a bit like biting into a delicious cheeseburger and being poked in the eye at the same time.

In every other respect, "Even The Devil Believes" is an occasionally strong and memorable hard rock record, with multiple anthemic refrains and some gloriously indulgent solos from the evergreen Oz Fox and vocalist Michael Sweet, whose pipes remain in excellent condition. The best songs are up there with anything from STRYPER's first three records: opener "Blood From Above" is a strident starting point, with strong shades of the band's fiery '80s sound; "How To Fly" is a likeable ELECTRIC LIGHT ORCHESTRA-tinged ballad that revels in its own mawkish extravagance; "Divider" brings muscular DOKKEN vibes and a particularly fine vocal from Sweet. If you're already a STRYPER fan, there is a decent amount to be enjoyed here.

For everyone else, the problem remains as same as it ever was. To buy into STRYPER's musical world, you also have to be able to ignore the fact that most religious thinking is instinctively reactionary, rooted in irrational fear and is therefore entirely contrary to both the spirit of rock 'n' roll and everything that heavy metal is supposed to be about. Frankly, it's a major turn-off. Even if you're a generous soul with a "live and let live" attitude when it comes to such matters, a song as lyrically insipid as "Make Love Great Again" is going to test your patience. Perhaps STRYPER deserve credit for not caring what anyone thinks and actively celebrating their beliefs through their art, but halfway through the schmaltzy and half-baked "This I Pray", I was struck by an overwhelming urge to nail a chicken to someone's front door. I suspect I will not be alone.

Ultimately, you can try to kid people that worshipping sky fairies is a shrewd pastime, but it just isn't. And as much as STRYPER deserve applause for sticking to their guns, it's almost impossible to listen to "Even The Devil Believes" without wishing that Satan would arrive and liven things up a bit. Metaphorically speaking, of course. I'm not insane.