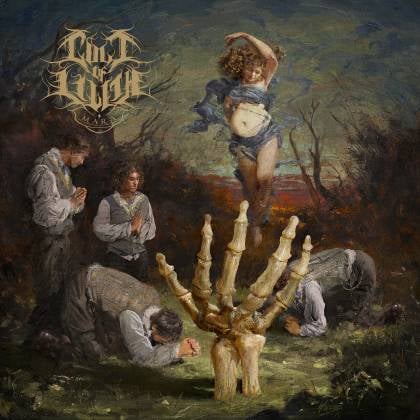 Death metal fans have been particularly well served this year, with countless strong releases from all over the planet. But even in these fecund times, a band like CULT OF LILITH stands out. Coming straight out of Reykjavik, Iceland, with the kind of force and ferocity that always pays dividends in the underground, this five-piece seem to have arrived fully formed and with astonishing levels of confidence driving them forward. Put simply, "Mara" is an absolutely fucking ridiculous debut album.

Regardless of the self-evident virtuoso prowess of its creators, this is an audacious opening statement: absurdly imaginative, technical death metal with fire in its belly and more brilliant ideas than seems strictly fair.

Released a month or two ago as a preview single, "Cosmic Maelstrom" offers a comprehensive manifesto from the Icelanders, via mercilessly precise grooves, GOJIRA-style melodic bellowing, skin-shredding blasts and, perhaps more surprisingly, some nimbly prodded harpsicord. Unlike a lot of self-consciously intricate death metal, CULT OF LILITH cram a huge number of hooks and memorable riffs into the mix, and "Cosmic Maelstrom" feels crafted, elegantly constructed and fiercely focused. The band's individual performances are all worthy of praise, but here technique and precision are all used in service of the song itself.

And what remarkable songs they are, almost overwhelming in their inventiveness and intensity and infernally blessed with exhilarating moments. There's the stop-start section midway through "Purple Tide" that sounds like "Prometheus"-era EMPEROR with a tech-death twist, before making a dizzying left turn into an unhinged Hammond organ solo. There's the wild blend of all-out extremity and post-punk crooning during "Enter the Mancubus"; the way "Comatose" veers from staccato brutality to dissonant squall, ending on an unsettling, ghostly piano figure; the unremitting riff assault of "Zangano", wherein vocalist Mario Infantes Ávalos scales the harsh octaves like a grand master; the woozy acoustic reverie that begins "Le Soupir du Fantome" before CULT OF LILITH transform yet again, channelling ARCTURUS-like perversity and mischief into a thrilling barrage of hyper-precise tech-death. Not a second is wasted and every song boasts at least one jaw-dropping, unexpected element that further illuminates this band's remarkably assured identity. The production is dazzling, too. In fact, everything has fallen together so perfectly here that it's almost suspicious. Either way, CULT OF LILITH have just delivered one of the most impressive metal debuts of the year.