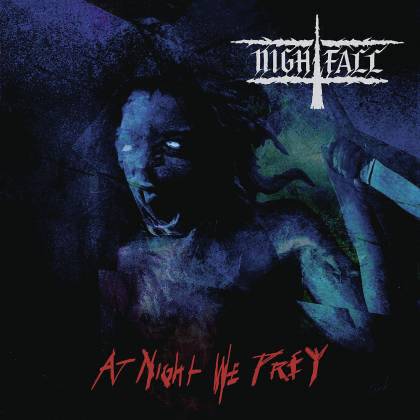 At Night We Prey

Thirty years and now ten full-length albums in, Greek blackhearts NIGHTFALL deserve great credit for persistence and determination. Although never quite achieving the impact of fellow countrymen like ROTTING CHRIST and SEPTICFLESH, the Athens quartet have been on an interesting journey, starting with feet planted firmly in the black and doom metal realms, before mutating into a more overtly gothic and alternative beast (with variable results, it has to be said) and back again to a ferocious and sinister ethos in more recent times. A cynic might argue that other, more notable bands have done much the same with more memorable results, but the good news about "At Night We Prey" is that NIGHTFALL's dogged pursuit of the macabre has reached an unexpected peak of potency here.

The problem with mid-period NIGHTFALL records like 1997's highly questionable "Lesbian Show" is that the band's tangential moves felt contrived and a little half baked. With renewed fire in their metal bellies, it's obvious from the genuinely ripping "Killing Moon" that the Greeks have finally clicked into a higher gear and found their natural calling. Eschewing the arcane pomp of their aforementioned contemporaries, NIGHTFALL have struck gold with a fiery hybrid of feverish melodic death metal, gothic atmospherics and flat-out brutality. There are numerous riveting highlights, too: "Darkness Forever" begins as a straightforward deathly thrash song, but bites and scratches with real conviction, as it morphs into a haunting but fiendishly catchy chorus and a glowering, doomed-out coda; "Witches" dives into a maelstrom of thudding, mid-paced old-school death metal, propulsive detours and ghoulish melodrama; "Meteor Gods" is a pummeling, schizophrenic epic, with a simmering core of MY DYING BRIDE-style melodic doom but with multiple proggy touches and startling bursts of feral blasting to offset more traditional instincts. Similarly, the title track sees NIGHTFALL stretch out a little, allowing a greater sense of space and depth to creep into a sturdy barrage of rumbling post-punk, elegiac interludes and stately, theatrical horror.

None of it will start a revolution, but not every band needs to be constantly pushing boundaries or upsetting apple carts: sometimes, the simple pleasure of a balls-out, dark-hearted metal record is pleasure enough. For fans of face-ripping gloom, NIGHTFALL's sizeable catalogue remains eminently worthy of exploration (I recommend 1993's "Macabre Sunsets", for what it's worth!),but "At Night We Prey" is plainly the best of the lot.