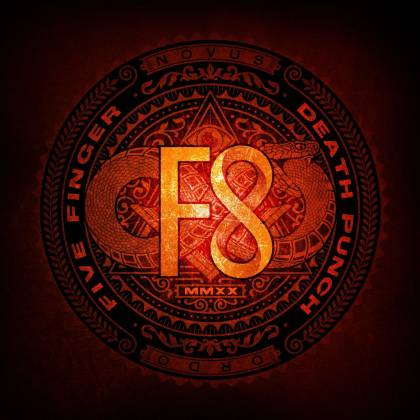 Nothing engenders vitriol and scorn quite like success. By this point, everybody has pretty much decided whether they like FIVE FINGER DEATH PUNCH or not. One of the virtues of having such a recognizable sound is that there isn't much scope for sitting on the fence here: whether you regard the Las Vegas arena regulars as one of modern metal's ultimate good-time bands, or a seemingly indestructible throwback to the knuckleheaded horrors of early '00s "wrestling metal", it's difficult to listen to any of 5FDP's music to date without picking a side. And, as you might expect, "F8" is no different. But what the band's detractors continue to ignore is that this juggernaut is not stopping any time soon, and after a few years of interpersonal turmoil and vocalist Ivan Moody's very public fall and rise, the spotlight shining on album number eight is brighter than ever.

Of course, if you think FIVE FINGER DEATH PUNCH suck then "F8" is best avoided. There are cosmetic changes here and there — it's certainly their heaviest album to date and feels more consciously metal than any previous efforts, most notably in terms of guitar tone and ensemble muscle. But as you start involuntarily punching the air during opener "Inside Out", it's the sheer DEATH PUNCH-ness of the whole thing that seals the deal. After 15 years of fairly relentless hard slog, they know exactly what they are and why they keep connecting with people. Overanalyzing these big, bold and often endearingly yobbish heavy metal sing-alongs is a waste of time: ultimately, the melodies are infectious, the choruses are uniformly enormous, the riffs are simple but lethally effective and Moody, clearly back on supreme form throughout, sells even his most unsubtle and clunky lyrics with sheer force of personality. It doesn't all hit the target. "A Little Bit Off" tries too hard to be an edgy pop song and should have never made the cut. But when they click into radio-friendly beast mode, with straightforwardly slamming grooves propelling those giant hooks along, FIVE FINGER DEATH PUNCH still sound exactly like the kind of cocky bastards that should be filling stadiums.

"Bottom Of The Top" is half BIOHAZARD stomp, half campfire reverie, with Moody switching from insouciant croon to scabrous roar with complete ease; "Mother May I (Tic Toc)" is a snarling, lurching, riff-driven diatribe with some gloriously woozy vocal harmonies; gnarly thrasher "This Is War" sounds exactly like you would expect a FIVE FINGER DEATH PUNCH song called "This Is War" to sound like, replete with generous helpings of vein-popping profanity. In contrast, "Darkness Settles In" and "Brighter Side Of Grey" are the obligatory showcases for Moody's genuinely world-class voice and angst-ridden charisma: the former is a sure-fire moment for every smartphone in the house to light up and twinkle, while the latter is simply one of the prettiest songs 5FDP have released to date.

It's not entirely clear why anyone needs to cram 15 songs onto a metal album at this point in commercial music's development, but thanks to the snappiness of their enduring blueprint, FIVE FINGER DEATH PUNCH never let any one idea outstay its welcome. For most of its duration, "F8" is another polished but powerful master class in how to write heavy metal songs that the whole world can sing. Whether you actually want to join in or not is up to you, but only a maniac would bet against another wildly successful DEATH PUNCH campaign. It was broke, they fixed it and here it goes again. Blam.