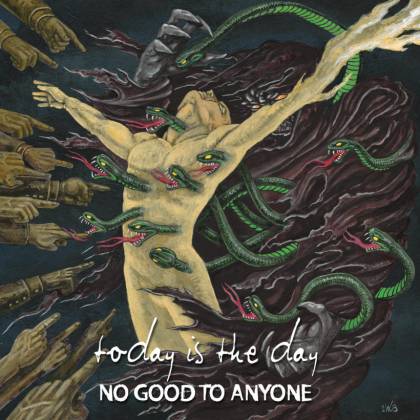 TODAY IS THE DAY

No Good To Anyone

TODAY IS THE DAY is simply one of a kind. The band's charming, maniacal, visionary frontman, Steve Austin, has been the constant figure who has remained steadfast for three decades as he has explored everything from noise rock to experimental metal. He has overcome everything from lineup instability and the coldness of the music business to significant health issues, including his close encounter with death when his tour van flipped and careened down a sloped street during the touring cycle for 2014's "Animal Mother", the act's last album. TODAY IS THE DAY makes a triumphant return with this year's "No Good To Anyone".

Many know Austin as the madman behind TODAY IS THE DAY, the band responsible for such barnburners as "In the Eyes of God" — the album that catapulted the careers of then rhythm section Bill Kelliher and Brann Dailor who moved on with the metal juggernaut MASTODON. Austin has certainly lived the rock 'n' roll lifestyle, but he's also a passionate, loving family man who lives his life nestled away in the Maine woods with his beloved wife, two sons and their pets. Sadly, Austin's dog had to be put down due to Lyme disease, an illness that struck Austin as well. His love of family is overtly evident on "No Good To Anyone"; his ode to said dog, "Callie"; as well as with the contribution of his 15-year-old son, Willie, on "Rockets and Dreams" and "Orland".

TODAY IS THE DAY's creative capabilities are vast and impressive. Though Steve and company are known so well for abrasive textures and off-kilter rhythms and beats, there's a definite reach into the pocket of the surreal and the sublime as well. TODAY IS THE DAY is always an avenue for expression of love and hate, everything in between and beyond. And there is always a sense of madness, sheer lunacy.

The opening, title track begins with an introspective, wandering travel into a dreamlike void. Steve's spoken-word delivery is haunting, and though the words are simple, there's a tremendous impact with the way that he spits out the line, "What's happening to you?" There was surely a sense of catharsis when he wrote the lyric during his recent trying times, but the impact upon listeners is likely to be profound. The introspection and soul searching takes a turn toward something more savage as relentless blackened vocals and musical chaos envelope the song.

Even when the musical stylings are more subdued, as with "Attacked By An Angel" or the cool and seductive "Cocobolo", the psychedelic enchantment is just as devilish as the extent to which "Burn In Hell" eventually becomes brutish. And tracks like "You're All Gonna Die" highlight Steve's soothing, impassioned melodic voice before the track flies off the rails in a way that brings to mind THE JESUS LIZARD, as though that great noise rock band became possessed by evil spirits.

There is no weak link in "No Good To Anyone". There is no chink in the armor. It's ironic that Steve's personal struggles have yet again translated to an incredible musical experience. TODAY IS THE DAY proves to be as relevant as ever.