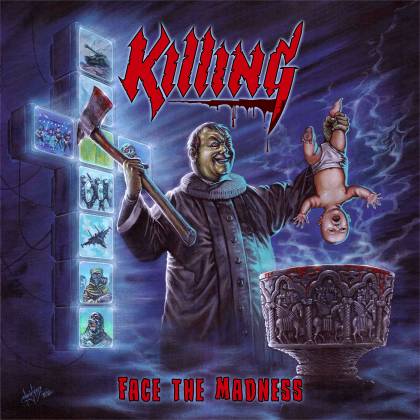 Denmark's contribution to heavy metal can hardly be overstated. There's KING DIAMOND and MERCYFUL FATE, for a start. But in terms of thrash, once you get past ARTILLERY, INVOCATOR and (at a stretch) KONKHRA, the average thrash kid on the street has not exactly been bombarded with gems from Greenland's territorial proprietors.

All of that changes instantly, within seconds of KILLING's debut album exploding into life. "Face The Madness" is a simply sublime thrash metal record: vicious, violent, goofy and almost overburdened with great hooks and fist-to-the-face dynamics.

It starts with what might as well be the Danish band's manifesto. "Kill Everyone" is two-minutes long and utterly unrelenting: the spirit and spite of early KREATOR welded to a more precise and destructive rhythmic core. The production hits the spot, too, with a perfectly pitched blend of ugly rawness and cutting-edge punch, all of which underpins the defiantly old school but oddly ageless nature of KILLING's songwriting. Bassist and vocalist Rasmus Soelberg has one of those hideous, throat-shredding rasps that ensures that everything he spits out sounds like a threat. On the obnoxiously catchy "Don't Get Mad, Get Evil", you can almost hear the malevolent sparkle in his eye, as a rampaging, instantly memorable chorus erupts from the melee, replete with EXCITER-like shrieks.

Thereafter, "Face The Madness" is a relentless, metal thrashing joy. "See You In Hell" swoops and destroys with real trad metal fervor, but at KILLING's customary, hell-for-leather pace; "Legion Of Hate" injects a thick, choking dose of rock 'n' roll into the Danes thrash attack; "Straight Out Of Kattegat" cranks up the cold-hearted, battlefield melodrama and delivers wave after wave of pestiferous riffs. Best of the lot, "Killed In Action" rounds out a beautifully paced and cohesive album with grinding, mid-paced macabre grandeur that reeks of bloody bullets and smoking flesh.

Thrash will never die because bands like KILLING keep harnessing its magic and finding fresh ways to batter us all to death with it. "Face The Madness" isn't a suggestion, it's an order.