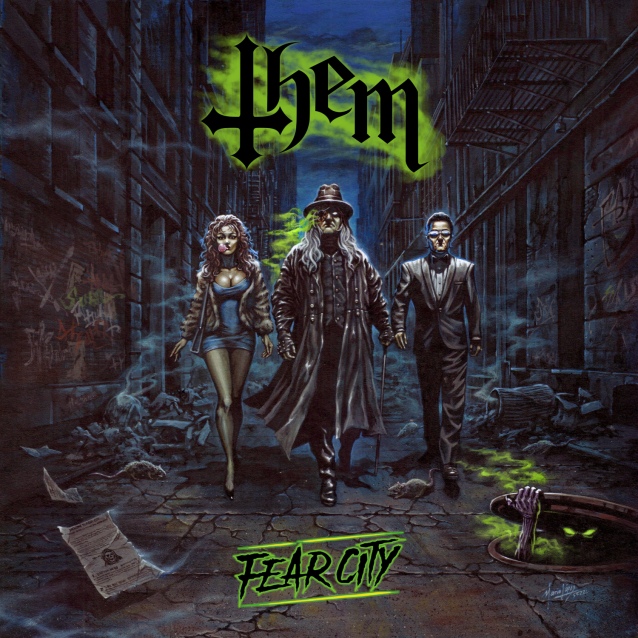 No longer tethered to their reputation as a former KING DIAMOND tribute act, THEM have evolved into a beast of their own design. As with both 2018's "Manor Of The Se7en Gables" and 2020's "Return To Hemmersmoor", the band's fourth album is a high-concept heavy metal record that adds depth and fresh dimensions to frontman Troy "KK Fossor" Norr's still-evolving lyrical world. This time, chief protagonist and morally opaque vigilante KK Fossor is on a mission to track down a distant descendant of arch foe The Witchhunter. In classic metal fashion, the culprit is a corrupt TV evangelist, known as Mr. Thompson, and Fossor heads to New York City to root him out and do the decent / unholy thing. So far, nothing to dislike here.

One thing that has defined THEM thus far is their attention to detail, and "Fear City" makes that more apparent than ever. With lots of subtle sonic touches and synthesizer seasoning, all with a real flavor of the '80s, these songs fit perfectly with their underlying narrative. In contrast with their previous albums' ghost-story grandeur, this is THEM's gritty, urban, retro-futuristic album, and their most eccentric offering to date.

Despite their predilection for storytelling, THEM remain a thunderous metal band to their bones. Steeped in the best of '80s metal, but filtered through decades of enhanced heaviness, "Fear City" is full of epic, melodic anthems that refuse to conform to traditional type. "Flight Of The Concorde" tears off at turbo-thrash pace, but with the uplifting melodic rush of European power metal and a bonus truckload of theatricality thrown in. The end result is deceptively heavy and genuinely exhilarating. "Welcome To Fear City" is even more unapologetic in its brutality: a dark and dramatic singalong with lashings of symphonic flair, it has the low-end crunch of NEVERMORE and the mystical charisma of POWERWOLF, while sounding quite unlike either.

As the story rattles along, THEM broaden their horizons in real time. "Graffiti Park" is a widescreen prog metal gem, with spectral shades of SAVATAGE and some lethal falsetto from Norr / Fossor. "191st Street" is similarly expansive, despite its thudding bullseye of a chorus. But the trophy for adventurousness has to go to "The Crossing Of Hellgate Bridge": a nine-minute epic for the ages, it begins as a powerhouse rabble-rouser, passes through neoclassical doom, and mutates toward a triumphant melodic crescendo, every second of it oozing authority. Like everything else on this wildly entertaining record, it sounds crafted but not calculated. Whether the album's concept sparks the imagination or not, THEM are just really fucking good at this stuff.