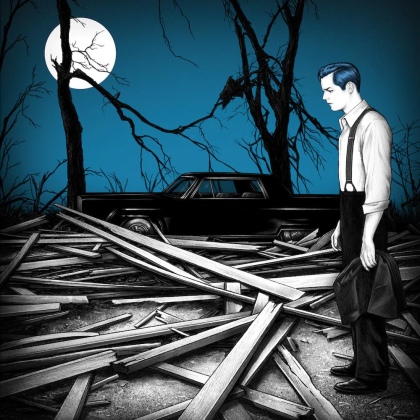 Fear of the Dawn

He has won 12 Grammy Awards and sold millions of records without kowtowing to the expectations of the music industry. Jack White has always, truly, marched to the beat of his own drum. The 46-year-old singer-songwriter is best known for his stripped-down, quirky garage rock with THE WHITE STRIPES, though he's been involved with THE RACONTEURS, THE DEAD WEATHER and more: a modern-day Renaissance man. Or, if that's too pretentious a description, he's unquestionably a multifaceted and ambitious artist considering that he also owns Three Man Records, a record label and studio, and he's a producer and actor. The charismatic multi-instrumentalist is poised to release his latest solo album, "Fear of the Dawn", which will be followed by a full-length titled "Entering Heaven Alive", which is set for release in July. "Fear of the Dawn" is a rowdy, 12-song release that travels the trajectory of the styles and sounds for which he's known, incorporating his ongoing morphing and evolutionary strides, and incorporating elements that boldly reach outside regular rock music terrain. With that said, "Fear of the Dawn" is also noticeably more gritty and hard rocking.

The album is just as ambitious production-wise as it is on a strictly musical level, perhaps even more so. The slick, futuristic guitar sounds and effects paired with forward-thinking studio work elevate the release in its significance to rock music's development. The interesting paradox at hand is that the production aesthetic is sharp, progressive and clean, and yet the underlying, core music is definitely grimy and bleak. Caustic, industrial-flavored guitars drive through the album's opener "Taking Me Back", and the effects pedal intricacies simply take the song to another dimension altogether.

"Fear of the Dawn" is indeed anything but a conventional, traditional rock record. Hip-hop beats wind their way mellifluously through "Hi-De-Ho", a song that features slicing guitar work that paves a path toward vocals that sound inspired by Indian or Middle Eastern music. The song's contemporary hip-hop feel is augmented by A TRIBE CALLED QUEST's Q-Tip. Elsewhere, a trip-inducing, guitar-driven expansive space opens up "Eosophobia" prior to the song's focus upon a manic and lethal percussive and guitar assault.

"Fear of the Dawn" proves that Jack White is as hungry and vibrant as ever. And he's certainly keeping himself busy, as "Entering Heaven Alive" will follow in just a few months. The pair of 2022 releases are his first solo efforts since 2018's "Boarding House Reach", though he reunited with THE RACONTEURS in 2019 for that band's first album in over a decade. White's two new solo albums meet one another across the song "Taking Me Back", the opening song from "Fear of the Dawn", which will resurface, with revisions, as the "Entering Heaven Alive"'s closing number, "Taking Me Back (Gently)" . In any event, "Fear of the Dawn" is proof that rock 'n' roll and hard rock, in spite of the prevalence of other popular music styles and the lackluster nature of contemporary active rock, is in good hands when the torch is carried by the likes of Jack White.