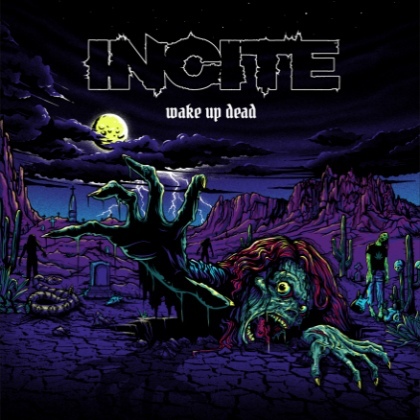 The children of successful people have their work cut out for them if they choose to follow in those footsteps. Richie Cavalera is likely to live in the shadow of his stepfather, heavy metal legend Max Cavalera (SEPULTURA, SOULFLY, NAILBOMB, etc.). Richie and his thrashing groove metal band INCITE have been slugging and hacking away since 2004, and the Arizona-based act has paid its dues and established a name for itself. Here they return with their sixth album, "Wake Up Dead", which is formidable but far from exceptional.

"Wake Up Dead" definitely flows as a cohesive new album; however, the latter half of the release is comprised of re-mastered songs culled from each of the band's previous five full-lengths, including the melodic metal rager "Fallen" from 2014's "Up In Hell" and the blistering title track from their debut, "The Slaughter". The career-spanning nature of the album makes "Wake Up Dead" an appropriate entry point and overview for newer onlookers. The strong, new material will serve completists well, but the limited number of new songs undercuts the value to existing fans.

Having Max Cavalera as a stepfather is surely cool as hell, but to be the child of that metal icon and a professional metal musician as well is obviously a double-edged sword. INCITE enlisted Max to sing alongside Richie on one of their songs, "War Soup"; it's an explosive groove metal song engineered to churn mosh pits. Richie's vocals work well with Max's here, and while Max's voice is deeper and more guttural, Richie's voice is much more hardcore and clear.

Elsewhere, "Fuck With Me (Wake Up Dead)" goes straight for the jugular. The track includes some "Dimebag-esque guitar soloing providing the necessary depth to keep the song from feeling too monotonous. "Sucker Punched" is equally vitriolic, resting upon a high-tempo percussive assault and hefty guitars, which are just as biting as they are melodic. "Mental Destruction", though, is the highlight here as it boasts an absolutely epic chorus that's bookended by playful guitar work, including some stuttered pic scratches.

Popular, relatively contemporary heavy music has segmented into various directions, but there continues to be a void as far as new blood forwarding modern thrash and groove metal. The quartet isn't exactly a new band, yet they're unknown to many metal fans who may be inclined toward them. While "Wake Up Dead" isn't essential listening, it is enjoyable. INCITE has yet to realize its potential, however. It's likely that they'll need to be bolder and step outside their comfort zone for that to happen.