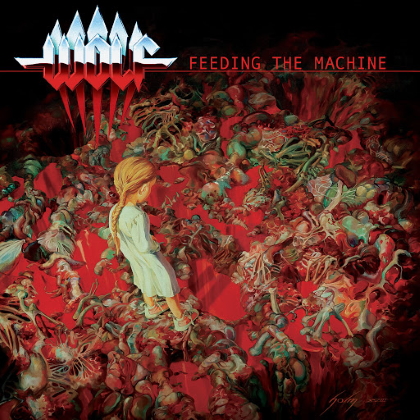 Although formed in the mid '90s, WOLF's great breakthrough moment came in 2004, when their third album, "Evil Star", seemed to single-handedly kickstart a new-wave-of-old-school heavy metal, leading to the emergence of ENFORCER, CAULDRON, WHITE WIZZARD and countless others. What discerning consumers will have noticed at the time, and this remains true, is that none of the bands that followed in the Swedes' wake came even vaguely close to "Evil Star"'s self-evident brilliance or indeed its two underground predecessors (2002's "Black Wings" being a particularly magnificent record, in case you've never had the pleasure). Whether it was Niklas Stålvind's instantly recognizable voice and gift for ghoulish metal poetry or the cunning way WOLF never sounded specifically like any particular band from the cherished past, they were always a cut above.

Sixteen years on, nothing much has changed. And that's just the way we like it. "Feeding The Machine" simply sounds like a classic WOLF album, rather than some self-conscious attempt to resurrect 1982's leather-bound sounds. Their identity as a band is so well-established now that Stålvind and his comrades are clearly having fun with it, keeping things varied and versatile enough to avoid repetition, but never straying too far from what is, let's face it, a pretty fucking cool wheelhouse. This time round, the propulsive, edgy likes of "Midnight Hour", "Shoot to Kill" and "Devil in the Flesh" suggest that WOLF are considerably more fired up than they were on 2014's "Devil Seed", while the authentically chilling "The Cold Emptiness" and dark and dramatic closer "A Thief Inside" allow the Swedish quintet's collective imagination to flourish, with the occasional proggy touch thrown in as an immersive bonus.

Elsewhere, "Guillotine" sounds exactly as you would hope a song called "Guillotine" would sound, KING DIAMOND-esque structural quirks included; "Mass Confusion" takes a mid-paced, SLAYERized approach to gritty grandeur; and "Spoon Bender" somehow lives up to its inspired title, as riffs of ANVIL-like thuggishness blend seamlessly with enticing, psychedelic vibes. It's all executed with real venom, Stålvind howling at the eye of the storm, but with a twinkle in its eye that only true believers in this stuff will see. Heavy metal is still the law, WOLF still rule and "Feeding The Machine" delivers multiple jolting doses of the real goddamn thing. Excellent work.