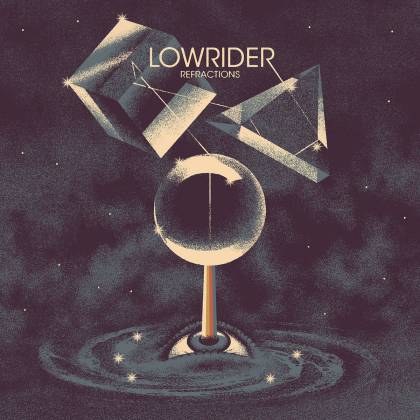 If you were a fan of stoner rock at the turn of the millennium, you will almost certainly have spent a few evenings getting baked to the sound of LOWRIDER's debut album "Ode to Io". Although the Swedish band had their share of detractors, mainly due to a very obvious debt owed to KYUSS, that single recorded statement is now rightly recognized as one of the defining stoner rock records of all time. Ultimately, LOWRIDER had the riffs and the tunes to stand apart from the hundreds of other bands peddling the same simple idea at that time.

They had the sound, too: quintessentially fuzzy and sun-scorched, but somehow wildly psychedelic and sonically nourishing, with oceans of floor-rippling bottom end and enough swaggering swing to clear the cosmic fairway and take out a few unsuspecting spectators into the bargain. And if we're being truly honest, "Ode to Io" has never really been topped when it comes to nailing precisely what stoner rock was all about. Maybe that's why LOWRIDER have quietly re-emerged and pieced together one of the most long-awaited follow-up albums in heavy music history. "Refractions" arrives bearing the weight of expectations, but you don't return after two decades without knowing instinctively that you're still the shit.

And so it proves. This is obviously going to delight ageing stoners like your humble correspondent, but it deserves to haul in anyone that loves huge riffs and balls-out heavy metal thunder, recreationally enhanced or otherwise. Such is the timeless nature of this sound, that LOWRIDER really do sound like they've never been away. Although time has injected a little clarity and crispness to the way stoner rock records are generally produced, the Swedes have kept their deliciously foggy countenance and simply embellished it when the mood takes them. A chewy wave of rippling Hammond on "Ode to Gannymede" is one particularly exciting step away from an endearingly myopic formula, but as you bang your head in slow motion to the powerhouse necro-blues of "Sernanders Krog" (which appears to be a tribute to a vegetarian restaurant in the band's native Uppsala) and the syrupy doom-crawl of "Sun Devil / M87*", the sheer, all-encompassing stoner-rock-ness of it all will be impossible to resist. And while it's unlikely that "Refractions" could ever achieve the legendary status of its predecessor, it's still 42 minutes of irrefutable proof that LOWRIDER are still chasing the buzz with utmost distinction.