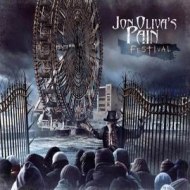 Jon Oliva is one of the world's truly great rock music artists. Folks that disagree probably never heard his work in SAVATAGE, TRANS-SIBERIAN ORCHESTRA, or JON OLIVA'S PAIN. And it's not like I was ever a huge SAVATAGE fan. The simple fact is that from the moment I heard "Maniacal Renderings" I was hooked, which makes it even more shameful that I completely missed its follow-up, "Global Warning", a mistake I'll be rectifying. New album "Festival" got me back on track again and I'm grateful for it, as it is yet another moving piece of progressive/classic hard rock; not as bombastic as "Maniacal Renderings", yet a grand album nevertheless.

Inspired by an Oliva nightmare, "Festival" is a more direct album than "Maniacal Renderings", if only because the arrangements tend to focus on standard hard rock fundamental (driving beat, heavy riff, etc). But then the comparison point is with an album from a band that outdoes the vast majority of its contemporaries from a musical ambition point of view. The common musical themes again link to bands like QUEEN, THE WHO, ALICE COOPER, and THE BEATLES, some of which is occasionally heard through a SAVATAGE filter (it's only natural). Much of "Festival", as usual, has a certain dark, even insidious, quality to it, certainly when the more breathtaking and/or ballad-esque moments aren't working to even things out, as one would hear on the very WHO-like "Winter Haven" (the Roger Daltrey inflection and all),as well as piano ballad "Now", and acoustic-based "Looking for Nothing".

In fact, with the possible exception of the aforementioned (and excellent) "Winter Haven", it is the album's hard rock-centered tunes that stand out, making the disc's first half the most poignant, though the sound classic rock (and another Oliva WHO moment) of "I Fear You" is a second half exception. "Lies" is a gripping mid-tempo rocker with several nods to Brian May (QUEEN) in the leads and a transitional section that grabs the listener with a keyboard buildup to a riff-heavy charge. The simple, yet unforgettable (even hypnotic — I still can't shake it) repeating chorus of "Death Rides a Black Horse" comes with shades of SAVATAGE and a Middle Eastern mystical hue. Following that is a mouthful of vintage Oliva on the audacious title track (especially the chorus) with, um, maniacally memorable lines like "There are many strange exhibits for all to see and hear / tortured souls / corrupted worlds / a feast fit for a king". "Living on the Edge" shoots it straight, too, and "Afterglow" is the pièce de résistance with a seemingly laid back, yet defined by a deep-seated tension that quickly unravels into a multi-faceted chorus that is as twisted as it is tough as steel and dangerously addictive.

As noted, the album's second half turns more contemplative and darker in a way that serves Oliva's conceptual basis, as well as giving "Festival" the vibes characteristic of the more expansionist end of the '70s classic hard rock opus. In that sense it is the ALICE COOPER dramatics that come through in a holistic, if not song-specific, way. More importantly, it all fits and hits with a hook-first mission.

On balance, I guess I'd still give the nod to "Maniacal Renderings" over "Festival", but that small gap seems to be closing the more I listen to the latter. It is all so relative that such a comparison is almost silly in a larger rock music context. Oliva brings it time after time and "Festival" is no exception.