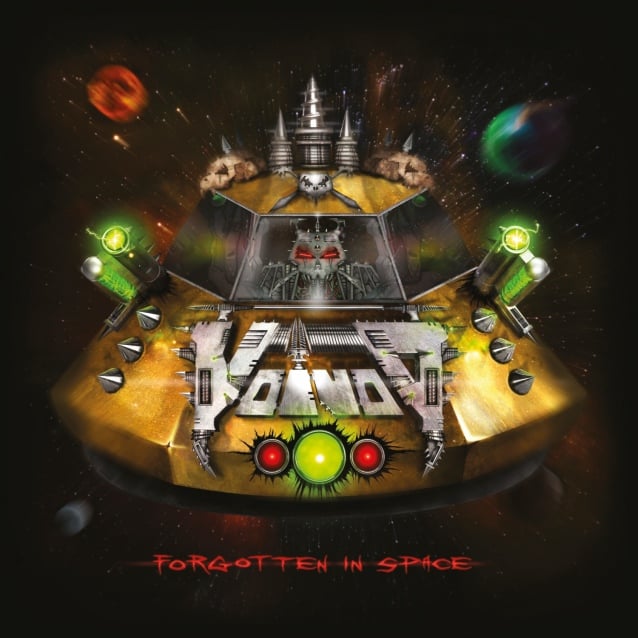 Everybody loves a box set, even if the price of the damn things can often seem a little prohibitive. This frankly phenomenal VOIVOD set is plainly worth every last cent, however. Firstly, the records contained within are utterly unfuckwithable. Emerging from Quebec in the mid '80s, ostensibly as part of the still burgeoning thrash metal scene, VOIVOD's music began as a deeply wonky take on the prevailing, fast 'n' furious trend, before veering off with fearless abandon towards a far more fascinating, adventurous and downright perverse route to progressive metal glory.

"Forgotten In Space: The Noise Records Collection" lavishly captures the moment when the Canadians found their creative mojo, powered by the feverish imagination of late, great guitarist Denis "Piggy" D'Amour. From the askance speed metal explorations of second album "Rrrröööaaarrr" to the wildly original mutant prog of "Killing Technology" and its immaculate follow-up, "Dimension Hatross", this trio of classics speaks for themselves. Pleasingly, none of the aforementioned albums have ever sounded this good before, on vinyl or any other format, with "Rrrröööaaarrr" particularly standing out as a certified racket transformed.

The real battle with these extravagant monuments to the past is that most diehard VOIVOD fans will have bought these albums several times over already. Fortunately, "Forgotten In Space" has visibly been crafted with love and care. It's a beautiful thing, with fresh artwork from drummer and all-round genius Michel "Away" Langevin, and classily evokes the otherworldly atmosphere of those early VOIVOD-ian years without looking self-consciously retro.

Meanwhile, the box is absolutely stuffed to the gills with treats. In addition to the three original LPs, which come in a variety of eye-frying swirls and splatters, there are vinyl editions of legendary live album "No Speed Limit Weekend '86" and the complete set of "Dimension Hatröss" demos, appearing here on vinyl for the first time. "No Speed Limit…" is an absolute riot and sounds far more powerful than many comparable live records from the era; the demos LP is arguably for true devotees only, but formative versions of "Tribal Convictions" and "Macrosolutions To Megaproblems" have a uniquely rowdy energy. Even better is the "Chaosmongers" DVD, which features a mini-documentary and a previously unreleased show from 1987 and an audio recording of VOIVOD's legendary show at Montreal's World War III festival in 1985. This is mind-bending prog-thrash gold, folks.

The whole gorgeous shebang is capped off with a classy, 20-page photo book, including a new interview with Away, and a Korgull-shaped USB stick with all the aforementioned music on it. None of it is aimed at the casual fan, but anyone that appreciates exactly how fucking special VOIVOD have always been will find this hard to resist at virtually any price.