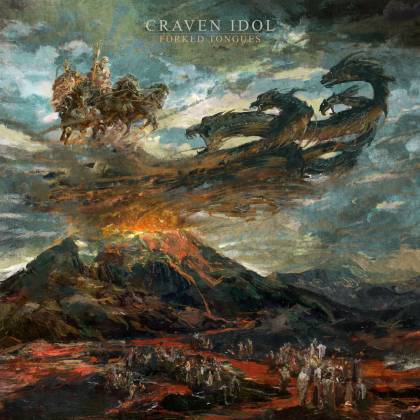 London's CRAVEN IDOL has been sharpening its blade for over 15 years, starting off as a duo that unleashed a couple of well-received demos prior to an EP and a couple of full-length albums. The unit has been far from prolific, clearly focusing upon quality rather than quantity. Making progress in recent years under Dark Descent Records' wing, CRAVEN IDOL is set to release its third full-length album, "Forked Tongues", a savage tour de force of blackened death thrash inspired by the classic era of heavy metal.

"Forked Tongues" is surprisingly just as majestic as it is barbaric. It is overwhelmingly epic without being pretentious. Fans of bands like ARES KINGDOM and ABSU might be drooling at the mouth even at the very onset of album opener "Venomous Rites", a vitriolic and unrelenting blitzkrieg of black and thrash. A triumphant, mid-tempo gallop summons the warring instrumentation forward in the spirit of MANILLA ROAD but within the sonic encapsulation of AURA NOIR on a track like "The Wrath of Typhon". The entirety of "Forked Tongues" exudes urgency, passion and intensity, but that immediacy is somehow distilled even further on "Iron Age of Devastation".

Vocal duties are shared by 75 percent of the band. Main man Sadistik Wrath, also a guitarist, is flanked by bassist Suspiral and guitarist Obscenitor. (The lineup is rounded out by drummer Heretic Blades.) Evil screeching and howls mostly characterize the collective delivery, but the authenticity and depth of expression is augmented by the occasional Tom G. Warrior "ough" death grunts and the equally charming and sparsely employed old-school Tom Araya falsetto belches. Worthy of note is the harmony of melodic voices that saliently chime in during the impactful chorus of "Deify the Stormgod".

"Forked Tongues" is cause for celebration for fans of pummeling and passionate blackened death thrash. Since the legendary Norwegian act AURA NOIR called it a day last year, CRAVEN IDOL may very well be next in line to claim blackened thrash metal's throne.