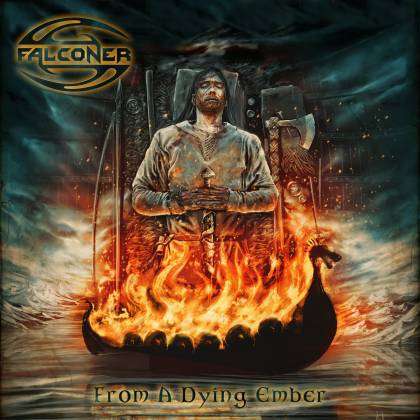 From A Dying Ember

Beloved by fans of folk and power metal, FALCONER have been an intermittent force for good over the last two decades. Six years on from the dark, windswept and generally well-received "Black Moon Rising", founding guitarist Stefan Weinerhall's largely studio-based crew have stuck to their guns and produced another album full of soaring folk melodies, theatrical flair and twinkly eyed romance. It certainly sounds fantastic, Andy LaRocque's production skills lending everything great warmth, depth and presence. Although perhaps expected, occasional bursts of unusual instrumentation now sound wholly integrated into the Swedes' thunderous sonic identity, and from dizzyingly catchy opener "Kings and Queens" to the final, epic sprawl of "Rapture", "From a Dying Ember" is basically guaranteed to have devoted FALCONER fans frothing through their facemasks.

Unfortunately, for the unconverted at least, the problem with FALCONER remains the same as it ever was. While undoubtedly setting the band apart, vocalist Mathias Blad's background in musical theatre and pleasingly gentle tenor are very much an acquired taste, even after eight previous albums of this stuff. Where heavy metal singers normally let rip, Blad performs the more sedate role of narrator, enunciating everything with absolute clarity but never truly scaling the octaves nor imbuing lyrics with much raw emotion. His vocals are impossible to fault, of course, but there are numerous points during "From a Dying Ember" when many metalheads will be desperate for someone to do some full-bore heavy metal bellowing. Blad is most palpably in his element during the plaintive "Rejoice the Adorned", a sweet but melodramatic piano ballad, the song demands an intimacy that many of the others manifestly don't. Again, "Bland Sump och Dy" follows a more restrained sonic route, an elegant Blad vocal spiraling away from the reverb-drenched, rootsy churn of the music.

But as superficially strident and aggressive as the likes of "Redeem and Repent" and "Thrust the Dagger Down" sound, they ultimately come across as more studied and polite than bombastic and exhilarating.

Somewhat ironically, the closing, seven-minute "Rapture" comes closest to justifying FALCONER's idiosyncratic approach. With greater room to maneuver, an overtly prog-tinged structure and even an eruption of blastbeats, it's a genuinely absorbing climax at the end of an album that promises much, but that delivers rather less.