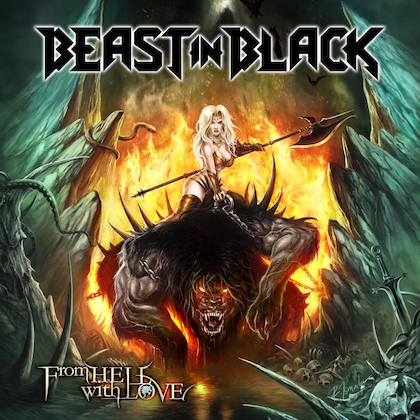 From Hell With Love

Anton Kabanen is a power metal and manga-eating junkie, his ear ever on the hunt for the most will-breaking melody this side of ABBA. Having parted from his former band, BATTLE BEAST, in 2015 after a decade-long run, he immediately formed his powerhouse group, BEAST IN BLACK. Both bands being named after the manga and anime series "Berserk", Kabanen's BEAST IN BLACK made more than a mere ripple with its 2017 debut offering, "Berserker". It was so well-received NIGHTWISH's Tuomas Holopainen went on record as saying, "You have to be mentally insane to not love this album."

Now in 2019, Kabanen and BEAST IN BLACK return, and with new drummer, Atte Palokangas, who replaced Sami Hänninen. The group's sophomore album, "From Hell With Love", may as well scream with zero ounce of shame: "It came from the eighties!" BEAST IN BLACK peddles retro, key-splashed rock sounds, which were eventually rejected by the "true metal" sanction of the day. Yet the funny thing is, the band does it with so much zest and love, within a market starving for a dollar, it passes off like the best punchline you've heard in forever.

If you read manga and/or comics, the lead track "Cry Out For A Hero" is a perfect way to fill the airspace behind you with its jumpy throb. In fact, the song is based on the classic manga, "Fist of the North Star". The clean projection takes the song's JUDAS PRIEST drive with a peppier and poppier set of choruses, glossed with keys and a fourth-gear tempo nearly hitting fifth. One thing that BEAST IN BLACK gets away with in 2019, which would've spelled a kiss of death in the 1980s, is the way the band maximizes its brazen electro-disco groove on the pumped-up title track. The riffs are so massive, and the songwriting so tight, that the song's dance gambit pays off huge. Ditto on "Die By The Blade", which might be the yummiest-sounding death deal in heavy music history.

Likewise, "Sweet True Lies" treads where LOUDNESS, KING KOBRA and to less finesse, KEEL found themselves in the mid-to-late eighties, futilely pushing for the great big pop metal score. Anton Kabanen and his band don't have the great corporate thumb forcing their hand. Thus "Sweet True Lies" floats effortlessly, while the much heavier "Repentless" goes into romping MANOWAR mode. BEAST IN BLACK later saddles up similarly on its rally into the maw, "This Is War".

Yannis Papadopoulos possesses a vocal range dropped somewhere between Rob Halford, Eric Adams and Minoru Niihara. This amalgam fuels BEAST IN BLACK's throwback sound, but what Papadopoulos does on the lush ballad "Oceandeep" can't be embellished enough; it's more subjective to say he needs to be heard to be believed.

It's astonishing how something so blatantly commercial, dismissed as gaudy years ago, sounds refreshing, even daring today. "Unlimited Sin" and "Heart Of Steel" would've had old-school metalheads perplexed over whether their cred was at stake by surrendering to something that would've been snug on SURVIVOR's "Eye of the Tiger" or EUROPE's "The Final Countdown" albums. "True Believer" is so convincing of its eighties designs, if you lived the times, you'd swear you'd heard it then in a cheesy action flick, or at least in a jazzercise room—strap on your leg warmers.

It's all so damned catchy, though: Damn you, Anton Kabanen.