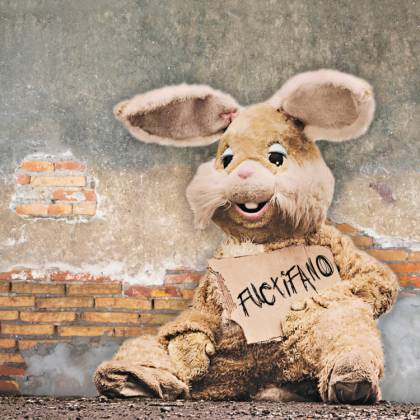 Peter And The Test Tube Babies

They may not have had the snarling menace of THE EXPLOITED or the boozed-up braggadocio of ANTI-NOWHERE LEAGUE, but for young British punk fans in the early '80s, PETER AND THE TEST TUBE BABIES were utterly irresistible. It certainly helped that songs like "Up Yer Bum" and "Banned From The Pubs" were obnoxious, ragged and deliberately stupid, but they were also delivered with insane levels of energy and belief. You have to be pretty smart to make music this dumb, after all. And yes, if you enjoyed the band's 2017 comeback "That Shallot", "Fuctifano" will definitely scratch the same itch, while simultaneously making what sounds like a genuine effort to be the TEST TUBE BABIES' finest album yet.

With its atmospheric intro and outro, "Fuctifano" seems to echo the band's greatest moment, 1983's "Mating Sounds of South American Bull Frogs", and there's a coherence and flow to this album that suggests that someone is taking things seriously. This band can really play, too, with a sharpness and power that they seldom hinted at in the early days. As much as they still like to portray themselves as a chaotic band of drunks, PETER AND THE TEST TUBE BABIES sound like they've got their collective shit together.

In musical terms, you know what you're getting in advance. "Fuctifano" is full of furious, fast-paced street punk anthems that spit and snarl at all manner of contemporary ills, from the idiocy and narcissism of social media ("Facebook Loser") to the woes of a part-time parent ("Saturday Dad") and that ol' devil alcohol ("Cydrated"),with the slack-jawed, bar-room knees-up of "Ain't Missing Her Yet" and the mischievously melodic "Wanker" providing a neat mid-album detour. None of it sounds like the work of a bunch of worn-out old punks. Instead, this is the kind of unashamedly entertaining and rowdy punk record that lots of people claim to make, but rarely do. It's way better than the new GREEN DAY album, for a start. Oi oi!