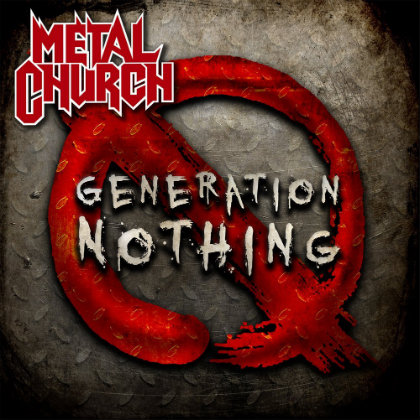 I recently caught up with METAL CHURCH vocalist Ronny Munroe at the Rock Harvest II benefit festival on the outskirts of Baltimore. Munroe was in town as a special guest of Gettysburg, Pennsylvania's GHOST OF WAR where they banded together for a mini-set of METAL CHURCH classics and "Pierced by the Maiden" from Ronny's second solo album, "Lords of the Edge". I found Munroe to be congenial and excited to have another run with METAL CHURCH, as he discussed the reformation of the band following their four-year pause.

"We both knew that one day was going to be the right time and that was for Kurdt (Vanderhoof) to decide. He called me one day and said 'I think it's time. What do you think?' So I said 'I'm in, let's do it.' Now we have a second shot at this, especially for me, coming back. This is unfinished business with METAL CHURCH. When we do end, we need to end on a better note than we did (before)...because how we put it out there was that it was the industry (prompting the band's hiatus),but we really disappointed the fans. So this time around, we waited until we felt the time was right. It's a blessing, I'll say that, just to be able to come back and do this again and to have a chance for the fans to want this again. That's always a blessing".

For a band that's suffered more than its fair share of adversities, Ronny Munroe has endured as one of METAL CHURCH's constants since he joined up for 2004's "The Weight of the World". Having to live under the shadow of the late David Wayne and to lesser degrees, former vocalist Mike Howe, Munroe has handled the mike for METAL CHURCH with grace.

Meanwhile, the relentless Kurdt Vanderhoof (who spent downtime from METAL CHURCH with Munroe in the power prog unit PRESTO BALLET before Munroe was called over to TRANS-SIBERIAN ORCHESTRA) has been bleeding his skull to restore honor to this band. Though he cites "Generation Nothing" as a return to the band's eighties roots (namely "The Dark"),that's a slight misnomer. "Generation Nothing", like its predecessors "The Weight of the World", "A Light in the Dark" and "This Present Wasteland", is reflective of the band's new order that came with Ronny Munroe. Frankly, there's not a damned thing wrong with that as long as you're not expecting "Beyond the Black" or even "Psycho".

As a lyrical contributor to METAL CHURCH's next-gen, power-modified style of songwriting, Munroe is credited as a co-lyricist on "Jump the Gun" and "Suiciety" from "Generation Nothing" while singlehandedly penning "Hits Keep Comin'" and "The Media Horse". Otherwise, the new album is a riff monster courtesy of Vanderhoof, Rick Van Zandt and Steve Unger, while Ronny Munroe toughens up his pipes in most spots, letting them loose with broader ranges on "Suiciety" and the nine-minute epic "Noises in the Wall".

Munroe pulled off a convincing David Wayne impersonation at Rock Harvest II with a ripping cover of "Ton of Bricks" and on "Generation Nothing", Munroe mirrors just enough fragments of his predecessor throughout the brisk "Scream" (one of the fastest METAL CHURCH cuts they've recorded under Munroe's tenure) and "Dead City" to bring longtime listeners to a comfy place. On the steady opening number "Bulletproof", Munroe rings closer to what he's done in the past for METAL CHURCH, yet there's a bit more fang between him and the band here, which is likely where Kurdt Vanderhoof lays his claim to rekindling the old days. Nevertheless, the spotlight remains upon Munroe doing what he does, only he carries more of an edge this time.

The scoffing title track "Generation Nothing" may pine for the days of rad, but it's still a headstrong beast of a cut with chuffing chords and clambering kick drums from Jeff Plate. Much of "Generation Nothing", however, sticks to a straightforward power metal drive with heaps of resounding guitar intros and dense plods, using "Close to the Bone", "Jump the Gun" and "Hits Keep Comin'" as examples.

Vanderhoof and Van Zandt are stellar in the solo sections of "Dead City", "Suiciety" and "The Media Horse". As extensive as "Noises in the Wall" is, veteran listeners will hang in there just fine, particularly as Vanderhoof, Van Zandt and Unger plow through a terrific homage to the NWOBHM at the end, leading to the final clangs of Jeff Plate's crash cymbals.

"Generation Nothing" is a product of its time separate of the fiercer "Metal Church", "The Dark" and especially "Blessing in Disguise", the latter of which Kurdt Vanderhoof was only a contributing guitarist and is otherwise relegated to long-past members. This album, like its immediate precursors, carries a distinction pocked outside of METAL CHURCH's best-known period, but it does so with respectable pride and polish. "Generation Nothing" boasts a personal best METAL CHURCH outing for Ronny Munroe, while the band as a whole plays tight lines all the way through. Thus this album is an agreeable career extension for METAL CHURCH, even if we're unlikely to hear anything new as frantic as "Merciless Onslaught" and "Battalions" or as volatile as "Gods of Wrath".

At least Munroe can peel the paint whipping up "Gods of Wrath" onstage, as the Rock Harvest II attendees learned.