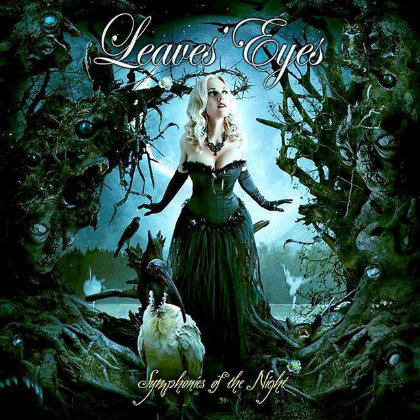 Symphonies of the Night

Of all the symphonic and folk metal acts out there, LEAVES' EYES is one of the least-touted despite boasting a worldwide audience. It hardly has anything to do with their talent. NIGHTWISH, WITHIN TEMPTATION and EPICA overshadow them in the popularity department, but LEAVES' EYES latest album "Symphonies of the Night" stands to elevate them in the field. For certain, Liv Kristine Espenaes Krull and husband Alexander Krull have engineered a world-class resonance that now carries more conventional rock drive than ever before.

In the past, LEAVES' EYES have concentrated upon presenting histrionic metal soundtracks to Norse and Viking folklore. "Symphonies of the Night" maintains that nuance, but the glaring difference from this album over LEAVES' EYES past efforts is its emphasis of groove. Without emulating their mainstream counterparts, LEAVES' EYES issues the most ear-pleasing, rock-oriented album they've yet conceived. Whether you like this thread of metal or not, it's hard to ignore "Symphonies of the Night"'s energizing lilt.

One of the other notable improvements to LEAVES' EYES outside of the album's lustrous production by Alexander Krull is Liv Kristine's delivery. Already superb in this band and THEATRE OF TRAGEDY a lifetime ago, the Norwegian livewire has spent obvious time expanding her ranges as well as her fluidity. On "Hell to the Heavens", Liv Kristine hits timbres surpassing even her expansive reach. On "Fading Earth", her pitch lowers for the most part, but it's her congruous pentameter to the song's fixed pulse that really impresses. Only with the overdubbed tracks do Liv Kristine's vocals float beyond a couple of seconds. Her main lines are pressed snugly against "Fading Earth"'s power rock throb and that's something to be taught across-the-board to symphonic, folk and even Goth metal bands. Even more pleasurable, on "Galswintha", Liv Kristine fuses a gallivanting second persona into the song outside of her customary operatic guise.

The rootsy folk supplements to "Galswintha", "Saint Cecilia", "Hymn to the Lone Sands" and "Nightshade" are all sharply mixed or in some cases, showcased. "Saint Cecilia" strips the metal gone, leaving Liv Kristine to weave an intoxicating narrative amidst the synthesized score, fluting, piping and choral supplementation. Film scoring is all but inevitable for the Krulls at this point.

The dichotomous plotting of serene folk music in the beginning of "Hymn to the Lone Sands" as it's ripped asunder by a speedy metallic tempest leaves the listener breathless. Alexander Krull, who continues to play aural devil's advocate with his monstrous growls on the album, munches all over "Hymn to the Lone Sands" while Liv Kristine swoons then majestically stabs the choruses with her punctuated delivery.

"Symphonies of the Night" maintains its humming course with gorgeous if occasionally haunting siren calls from Liv Kristine, "Angels and the Ghost" being a prime example. Alexander's interjecting grumbles are part and parcel to LEAVES' EYES sound (a beauty and the beast vibe they helped usher into fashion),but after such enhancement to Liv Kristine's ranges and carriages, the snarls just get in the way after too many appearances. "Eleonore de Provence" is designed to transmit Alexander's huffing on the agro-punched verses, but the irony is that his wife's soothing arcs serve as an elegant counterpoint to the blazing thrash ripping behind her on the choruses.

Other than that criticism, "Symphonies of the Night" is by far LEAVES' EYES most accomplished work to-date. They've figured out the average listener responds more to groove instead of impressionism and it would be no surprise to see this band reap its due reward this time around.