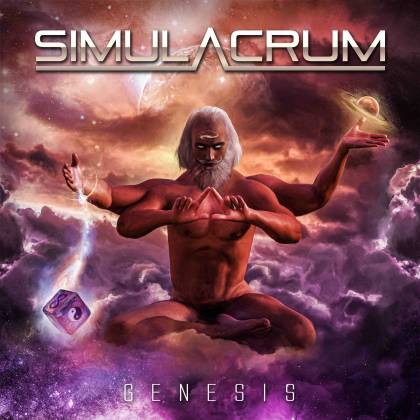 Three albums in, and Finland's SIMULACRUM have definitely focused in on their sound. Presumably buoyed by a decent record deal, the band have risen to unexpected heights on "Genesis", even though this is very much an album of two distinct halves.

The key to this band's efficacy lies in their shrewd and subtle blending of old and new prog metal styles. Pitched somewhere between the hyper-precise classicism of SYMPHONY X and the dissonant, polyrhythmic lurch of a post-djent world, the first half of "Genesis" bulges at the seams with great riffs, soaring vocal harmonies and melodies that, initially at least, suggest that this band have strong aesthetic ties with the power metal fraternity. Recent single "Arrhythmic Distortions" is a case in point: by the standards of most melodic prog metal, it's an incredibly inventive and even eccentric affair, as the lavish pomp of those harmonies collides with intricate, staccato grooves and dense layers of glistening synths.

Likewise, opener "Traumatized" and the similarly thunderous "Scorched Earth" have all the bombast and richness of symphonic metal, but there's a WATCHTOWER-like nimbleness to SIMULACRUM's ensemble delivery and more than enough 21st-century sonic punch to flamboyantly tick the heaviness box.

Also abundantly apparent is that SIMULACRUM have outgrown their more traditionally metallic origins and fallen collectively in love with prog as a limitless artform. The second half of "Genesis" — effectively, its four-part title track — is a genuine revelation. Although still rooted in metal to some degree, what transpires during this 31-minute behemoth is the real-time blossoming of SIMULACRUM into a bona fide prog band. In truth, it blows the (mainly great) first half of the album calmly but definitively out of the water. With numerous delicate sidesteps into jazz fusion and psychedelic territories, any sense that the Finns are merely tinkering with DREAM THEATER's blueprint soon evaporates. In particular, "Part 1: The Celestial Architect" and labyrinthine finale "Part 4: Entropy" are stunning pieces of multi-generational prog metal, with co-vocalists Niklas Broman and Erik Kraemer throwing themselves into their respective roles with bug-eyed alacrity, amid flurries of Zappa-like, syncopated jazz-rock mischief and, it hardly needs saying, a gloriously nonchalant xylophone solo. It's indulgent, dramatic and ever-so-slightly unhinged.

On this evidence, SIMULACRUM have more in common with BETWEEN THE BURIED AND ME and HAKEN than they do with any progressive power metal band. It's fairly obvious that this band are well aware of that fact, too. "Genesis" is a strong record from start to finish, but its second half is the real treasure. Their next album promises to be a monster.