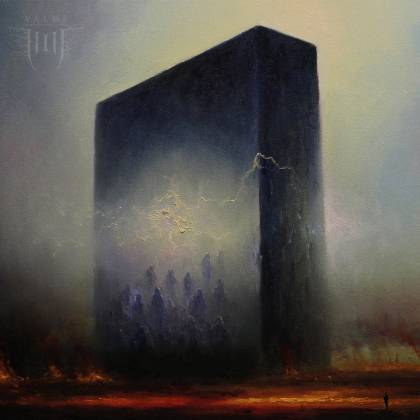 It's not easy to stand out in an increasingly overcrowded death metal/deathcore marketplace, but Sweden's HUMANITY'S LAST BREATH have already established themselves as a unique force in ultra-modern brutality. Detonating like a sack of sledgehammers chucked through your living room window, "Välde" arrives only 18 months on from the venomous and angular "Abyssal", somehow nudging the band's extremity fader even further into the red in the process. Given the ongoing global clusterfuck, we probably shouldn't be overly surprised that HUMANITY'S LAST BREATH are even more pissed off than usual, but bearing all that in mind, this slams with startling levels of livid conviction, from brooding start to bruising finish.

As with both of their previous albums, "Välde" deviates proudly from the modern death metal norm, sonic crispness and crunch aside. One major factor is that HUMANITY'S LAST BREATH seem largely incapable of writing derivative riffs. While the likes of "Glutton" — with its underlying, quasi-industrial churn — and the utterly berserk "Dehumanize" clearly exist within spitting distance of standard notions of heaviness, their intrinsic oddness conjures more questions than answers: is this, I don't know, extreme groove metal? Left-field deathcore? It doesn't actually matter, of course, but it's exhilarating to hear a band so instinctively unconcerned by the rules, unwritten or otherwise.

Similarly, "Spectre" is a master class in blackened, tech-metal bait 'n' switch, although executed with the jagged precision of modern death metal, it's a deeply warped and wayward collage of mutant riffs and brittle, post-metal scree. Oh, and it has a remarkably catchy chorus, too. Meanwhile, the closing "Vittring" sounds like a post-trauma MESHUGGAH being sucked down some slavering, anti-cosmic plughole.

Admittedly, at a generous 52 minutes, the relentless tsunami of cudgeling, claustrophobic riffs could seem a little grueling and monotonous. HUMANITY'S LAST BREATH don't offer much in the way of drama or dynamics, but their unrelenting sonic callousness and the admirable weirdness of those riffs ensure that "Välde" is an authentically immersive experience. Not for anyone who desperately needs cheering up, perhaps, but fans of originality and filthy riffs should definitely take the plunge.