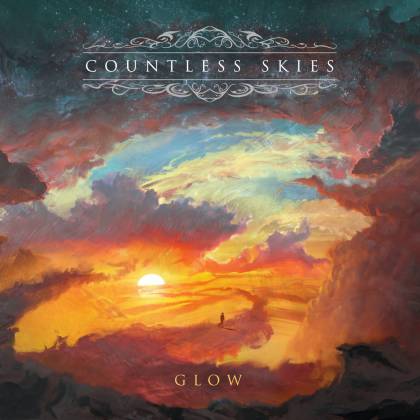 The thin line between thrilling, ultra-hooky melodic death metal and weakening, ultra-hooky metalcore was blurred beyond all recognition long ago. Fortunately, the subgenre's malleability has enabled many bands to pursue a more progressive course, and COUNTLESS SKIES elbow barge their way to the front of the quality queue on their second album, following-up a first-rate debut album (2016's "New Dawn") with a new batch of songs that seem to almost casually redefine melo-death as a bombastic, fervently widescreen endeavor. It's all so rich in the colors of prog rock and metal, both past and present, that the band's undeniable connection to Gothenburg circa 1993 now feels thoroughly secondary. Not, of course, that "Glow" doesn't slam like Tony Soprano's fridge door on a regular basis, and the soaring, uplifting melodies that define many of melo-death's finest hours are here in abundance.

But COUNTLESS SKIES are clever, creative souls. "Glow" flows like a prog record, from the explosive, eyes-to-the-sky euphoria of opener "Tempest", to the closing three-part sprawl of the title track(s). There are feint shades of artful melo-death contemporaries like OMNIUM GATHERUM and even AMORPHIS within the tense but tenacious "Summit"; with its windswept, pagan metal gait, feral blastbeats and bursts of rousing, BORKNAGAR-like pomp, it's a sparkling symphony in miniature. Similarly, "Moon" offers a vibrant labyrinth of riffs and feels, those catchy melodies always front and center, and yet gloriously free of cliché. It's a big-hearted progressive death metal anthem for the ages (with bonus mellotron).

Having already proved that they have outgrown their roots, COUNTLESS SKIES march deeper into prog territory for the closing "Glow" (Parts 1-3),dancing nimbly between woozy psychedelic drift and staccato riffing, occasionally sounding a little in thrall to OPETH (but then, in their defense, why the fuck wouldn't they be?),but also stoically pursuing a distinctive course of their own imagining. It's exciting, imaginative stuff from first to last, with vocalists Ross King and Phil Romeo doing vastly more interesting things with the growl/croon dynamic than most, and (ahem) a steady flow of elegant embellishments and mischievous detours. It reaches a juddering emotional crescendo on the closing "Glow (Part 3)" wherein COUNTLESS SKIES audibly go for broke, hurling giant hooks, sweeping synths and structural curveballs in all directions and pulling off a masterful folk-tinged, prog metal extravaganza in the process. It's an epic conclusion to a classy and fearless piece of work.