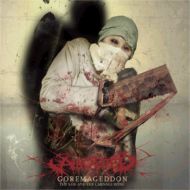 Goremageddon (The Saw And The Carnage Done)

Ah, "Goremageddon". This kind of sounds like a very good thing indeed — the ultimate end to all production-line bands who picked up a couple of surgical textbooks and thought they could re-write medical history, not to mention the first few CARCASS albums.

Except ABORTED, of course, don't quite mean it that sense. They want to shock you in a positive way with the blood-spattered ghoul brandishing a bonesaw on their cover artwork, and make you believe that their murderous sounds are the final word in the genre commonly known as gore metal.

One problem: just as with the phenomenon of the pierced nipple, or the circus freak show act who hangs weights from his overstretched genitals, there is similarly not much left to shock within this genre, no matter how much blood, entrails and general nastiness they cram into the visuals.

So, again, it's left to the music of this Belgian quintet to bring you back time and time again to their latest opus like a rubbernecker at a major road accident. Whilst "Goremageddon" can't claim to be quite so morbidly fascinating, ABORTED have obviously developed into a very solid band over their three-album tenure. Sure, they didn't really need to resort to hacking up the flow of their songs with the same old straight-outta-"Hellraiser" samples (like, rent some other horror movies, pur-lease),but the production is thick and weighty, the riffs fairly savage, the drumming none-too-clumsy and, overall, there are enough good points here to make you bypass some of the verbal diarrhea oozing from their song titles ("Methiculous Invagination", anyone?).

Rotten, but not a stinker.