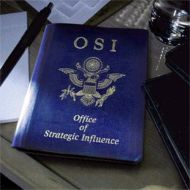 Controversy isn't something readily associated with something as mathematical and calculated as a progressive rock supergroup. But controversial this album is — and not for the first reason that springs to mind. That group/album title, you see, eludes to a proposed covert US information agency dreamed up after 9/11 to supposedly spread favorable propaganda in countries none too keen on Uncle Sam. All a bit Cloak and Dagger? Well, perhaps not half as much as both an ex and current member of DREAM THEATER (keyboardist Kevin Moore and drummer Mike Portnoy respectively) coming together again after what seemed like a slightly sour split back in the mid-nineties.

At the time, keyboardist Kevin Moore seemed to be fairly tired of twiddly progressive metal, and the remainder of the band uncertain of his ability to progress with DREAM THEATER's, er, progression. Yet, time, as they say, heals, and now the two are working together again — along with FATES WARNING guitarist Jim Matheos and guesting PORCUPINE TREE mainman Steven Wilson. All very warm and cozy.

Which is more than can be said for this album. It couldn't be colder if you threw it in the freezer overnight. And we're not saying that's a bad thing — it's just different to what you might expect. As opposed to raging arpeggios screaming out of the speakers, "OOSI" leans heavily into brooding electronica and soundscapes. Largely thanks to Moore's work with CHROMA KEY and heavy influence here, the likes of "The New Math (What He Said)" pulse and throb delightfully with samples and loops, with only Matheos' methodical guitar crunch pulling it back into rock world. Comparisons can be made with everything from MOBY to RADIOHEAD to DREAM THEATER themselves, but one of the major selling points is undoubtedly Moore's "world-weary" vocals, which ebb and flow perfectly when OSI hit a groove.

Eventually and inevitably, however, the album becomes mired in its own introverted ways. "Dirt From A Holy Place" stumbles around merry-go-round-sounding keyboards, "Memory Daydream Lapses" is too cotton-bud light, and closer "Standby (Looks Like Rain)" clips itself abruptly into silence after two minutes of incidental nothingness.

You couldn't label "OOSI" a screaming symphony of any description, but the lighter side of life sometimes works wonders. A pity that OSI eventually burst their own promising bubble.