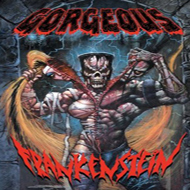 Hey, what's lamer than Jerry Only taking out a coupla random palookas and touring as THE MISFITS to shake a few more dollars out of that particular old dead tree? How about if his brother and newly-minted nemesis, Doyle Wolfgang von Frankenstein, put together a band so unforgivably dumb and boring, you'd rather go sit through an all-CREED karaoke night at an airport sports bar than listen to it?

Well, say it ain't so, Doyle. This eight-song introduction to the Crimson Ghost's midlife crisis has the added insult of being produced by Glenn Danzig, who certainly ought to have known better (and who, based on his track record from "Danzig 5 â€“ Blackacidevil" on out, might not be the best mentor for music career advice you could find). The band seems content to pick through the scraps from Papa Glenn's garbage can, these songs sounding like warmed-over demos of songs that didn't make the cut in the John Christ era, with a few gratuitous fast parts that come and go seemingly at random. The vocals are heinously off-key in places, the drums are obviously programmed, and the riffs are your basic bar-band strip-club boogie clunkers, thick and heavy guitar tone dialed in somewhere between punk, sleaze-rock and psychobilly and then wasted on these dribbling rehashed dogs.

The end result sounds a little like really old, really bad POWERMAN 5000, or any number of no-hope, no-budget bands clogging up the Tuesday night new band showcase and half-price wings night at your local rock dump. It'd be a bad record regardless of the names involved, but with Doyle and Danzig signing off on this, GORGEOUS FRANKENSTEIN becomes an out-and-out embarrassment. It's the kind of waste of time that'll be mindlessly defended by a handful of Fiend Club members, ignored by most of the world, and grudgingly collected by that guy with the skull tattoo on the side of his head who wears a devilock and the same creaking leathers every time he hits Goth night to pick up chicks half his age.

For the love of all things drive-in and hokey, you fucking idiots, get a reunion tour going before one of you dies. Especially if this is the best you can do without each other.