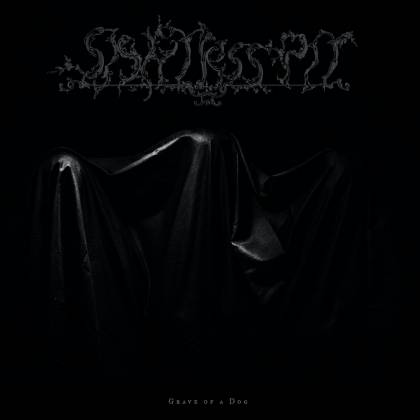 Grave Of A Dog

Fans of brain-scrambling underground extremity should already be more than aware of the extraordinary music that all three members of SIGHTLESS PIT have been making up to this point. A new project formed by FULL OF HELL frontman Dylan Walker, THE BODY drummer Lee Buford and the remorselessly bewitching Kristin Hayter, a.k.a. LINGUA IGNOTA, this is about as red-hot as experimental collaborations get, and so it's particularly thrilling to witness the complete lack of compromise or conventional thought displayed throughout "Grave Of A Dog". If you've thrilled to FULL OF HELL's endlessly amorphous grind terrorism or been emotionally crushed by LINGUA IGNOTA's masterful album, "CALIGULA", from last year, you will have a reasonable idea where these, erm, "songs" are pitched, both musically and atmospherically. But it's a testament to the ferocious individuality of all three protagonists that this never feels like a simple blend of their respective trademarks (if, indeed, any of these musicians can be pinned down to one thing). Instead, "Grave Of A Dog" kicks open a new door, into a world of oppressive intensity, where euphoria and horror are indistinguishable, and where accidental dynamics are wielded like scalpels.

You can either view opener and first single "Kingscorpse" as a taste of what's to follow or, as seems more fitting, the first in a relentless succession of shocks to the system. With the combined voices of Walker and Hayter conjuring their own aural weather system, and the trio's warped and wayward noise generating ever murkier shades of black, overdriven electro-kicks throb like bomb blasts and we are definitely not in Kansas anymore. An ingenious harnessing of electronics, combined with microtonal ooze wrung from strained sonic seams, adds further layers of disorientating density. "Kingscorpse" only lasts for four minutes, but it's one of the most immersive things you will hear all year.

Having thundered through that entry point, the rest of "Grave Of A Dog" will exert a similar gravitational pull on your synapses. "Immersion Dispersal" is like some timeworn SUICIDE outtake reimagined by BEHERIT in an underground prison; "The Ocean of Mercy" is a sublime, surrealist headfuck, with Hayter's glorious bellow adrift on a sea of swirling discord; "Violent Rain" takes a darkly cinematic plunge into an unforgiving cosmos, via lysergic ambience and elegant piano; the closing "Love Is Dead, All Love Is Dead", is an infernal confection worthy of Scott Walker's esoteric later works, as Hayter negotiates an ever-twisting maze of feedback, drone and pulse, lost in some hellish reverie.

Yet more startling, genre-phobic brilliance from some of the underground's sharpest blades, then.