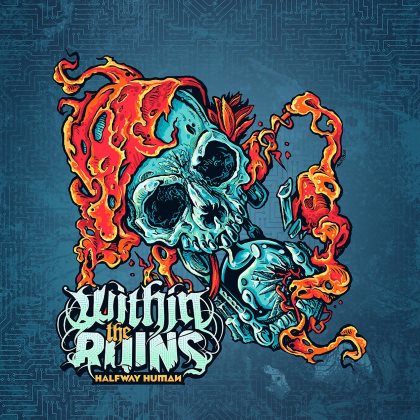 What hell FEAR FACTORY, MESHUGGAH and even BEHOLD... THE ARCTOPUS hath wrought!

Technical extreme metal being less of a fashionable offshoot and more of a challenge that's been met to death already, WITHIN THE RUINS is one of the few bands of its kind that still seek to impress. Even if that means roughing up its shred-tastic tech-grind (or deathcore, if that's your preference) to certain latitudes while dressing certain portions to give its brain-scrambling chaos a sense of order. This comes in the way of occasionally sparkling choruses and spiffy clean vocals from bassist Paolo Galang, who makes his first recorded appearance with the band since joining in 2015.

WITHIN THE RUINS's fifth album, "Halfway Human", is hardly what anyone might call accessible, yet the modifications made to the group’s cyber-grind-prog schism absolutely give the album luster beyond its intended grit. Here the group keeps you busy, as ever, trying to disseminate its systematic signature jerking, chugger bugger breakdowns and blast-beat battering. Yet anyone following this band is sure to agree that there's a minute new order here that may gain the unit an extra helping or two of followers.

There's a cold if precise feeling to opener "Shape-Shifter", and later, "Bittersweet", that both dulls and heightens the senses, if that makes any sense. WITHIN THE RUINS pummels its listeners' ears to the point of acquiescence with slow, rhythmic hardcore grooves coated with electronica and near-robotic chunk chords. At the same time, "Shape-Shifter" contains thrash bursts and omnipresent guitar shreds that pull the listener out of a near coma induced by all the technical savagery. The band wallops one just in time for the raging speed opening "Death of the Rockstar". This song's predictability is its foil; its aspiration is to be an even busier mirror of SOILWORK and is a nuisance. A killer guitar solo from co-founder Joe Cocchi and a sweaty, inventive breakdown rescues "Death of the Rockstar" from a nosedive into banality.

On the ups, Cocchi's guitars on the following track, "Beautiful Agony", are marvelously painful indeed. Track six, "Objective Reality", is one of the most interesting tracks due to its frequent progression changes and huge, clean-sung choruses. Its subsequent drubbing is exhilarating in spots, manic to a fault in others.

As with the group’s previous albums, there's a ton to glom onto with "Halfway Human", but you've heard much of it already. Though WITHIN THE RUINS's musicianship is goddamned impressive, inevitably it's sensory overload by the time "Absolution" strikes, no matter the slick harmonizing budging into its bridge.

There's no taking away this band’s aptitude. The components of WITHIN THE RUINS, ever-changing as they've been over years, are massive, and on any given night, the band can dust any other band sharing the bill. If you're a carnivore of this tech-blazed stuff, then "Halfway Human" is a mandatory grab. If you're not, run like hell, because WITHIN THE RUINS will cripple you within five hundred feet of its seismic ruptures. Either case, be sure to Q-tip your ears before and after consumption.