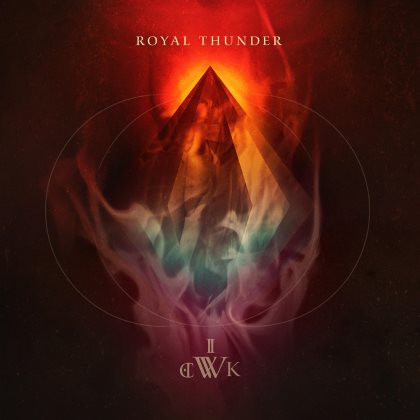 Georgia is one of contemporary American metal's saving graces. Thusly it shouldn't be a surprise that the state’s ROYAL THUNDER now claims bragging rights, alongside the esteemed company of MASTODON, BARONESS and KYLESA, as sludge-prog cream of the crop. Though ROYAL THUNDER has taken a slower course to recognition, thirteen years to be precise, its persistent evolution has propelled the group’s stature in just the past few. The band’s signal flare album, 2015's "Crooked Doors", indicated that ROYAL THUNDER wasn't just the latest arrival carrying the hopeless "female-fronted metal" tag. If that album defied category outside of the base sludge and grunge labels that came affixed to it, damned near every writer and listener is going to be at-task trying to describe the band's new album, "WICK".

Perhaps the best summarizing press blurb for "WICK" should ring thusly: this is an emotional and sublime album assiduously projecting the duress surrounding its creation. Fighting through grief over the loss of loved ones while recording the album, the toll upon ROYAL THUNDER’s members speak volumes. Particularly through Mlny Parsonz, who often sounds as aggrieved on this beautiful album as Janis Joplin through the searing sweat on her many renditions of "Ball and Chain". While hardly the same brash tigress Joplin was, Parsonz frequently finds the muscular mechanism inside of her to turn "WICK" into a wringing, yet sensitive art rock album. "WICK" needs and commands patience from the listener, but anyone with a soul will catch on with what ROYAL THUNDER has borne from themselves. Empathy is what will bind you to it.

"Burning Tree" catches fans off guard even with the band's forewarning this album comes stocked with new directions. Its psych-swept lullaby groove leaves Mlny Parsonz open space to lull overhead with up and down spools, pulling the track through her whispery wake. Inherently, "Burning Tree" is a decorative KYUSS interpretation with calmer vocals and a purposeful simmer. ROYAL THUNDER likewise inches into "April Showers" with Mlny's crawling bass plod, Josh Weaver and Will Fiore's woozy guitar plucks and finger chimes, together opening a portal for the listener to ease through. Mlny, ever the perfect combination of toughness and allure, grizzles up as the meat of "April Showers" is whacked down. The song goes big with its amplified climax and finishes as lushly at it begins, capped by a screechy, abstract finale.

By the time "Tied" arrives only three songs deep, if you're not deeply impressed by this band’s depths, Mlny especially, digging to reach into the individual member’s cores, then this isn't the album for you. At the root of "Tied"'s dipping grooves is a LED ZEPPELIN palette—for a real ZEP hike that works delightfully, stand by for "Anchor"—that gives hint to the forthcoming jive spiking the song. This makes the blues and classic rock shakes of "We Slipped" thereafter even more arresting. The piano and cello-splashed final stanza of "We Slipped", those instruments returning later in a wonderfully zany spot amidst the swampy blares of "Push", is a breathtaking shift toward alternative rock almost nobody will see coming—along with the moody alt plugs encased within the verses of the prowling title track.

For those clamoring for this album to plant the pedals and rock out, that comes on "The Sinking Chair". Whether you've been nervously waiting for this moment to come or you've been soaking everything else prior to with admiration, "The Sinking Chair"'s arrival is perfectly placed on the album. Track listing strategy is something you can't necessarily teach a band unless you have a whip-smart producer; you must have the raw instinct on when best to make a rousing statement, and that's exactly what "The Sinking Chair" does. The band takes its hardest shot at the precise moment for maximum impact. Smarter than face value, once you absorb the slow, translucent "Plans"thereafter. This song ends up being Mlny's finest hour on the mike to this point in her career. Somewhere between Janis Joplin and Robert Plant does she strike amidst the gradual tumble of "Plans", and her writhing pipes will get you on this one, guaranteed.

There will be criticisms of "WICK", much as there were against BARONESS for taking its off-the-beaten-path explorations down the vivacious roads of "Yellow & Green". There tends to be an unwritten law in this thread of music that sludge-based bands had best be cautious when taking steps out of their aural muck. Demographics dictate a band's survival, so when bands exhibit ROYAL THUNDER’s courage to play true to themselves in the interest of maturing as artists, that's special. Even more special when the results are far more than a mere growth spurt. "WICK" is hardly a barnstormer; it's much better than that. It makes you wait for payoffs that faithfully come ("Turnaround" being a prime example),and that says far more than full-frontal detonation. This is a tremendous work of art from a band deservingly catapulting to elite status.