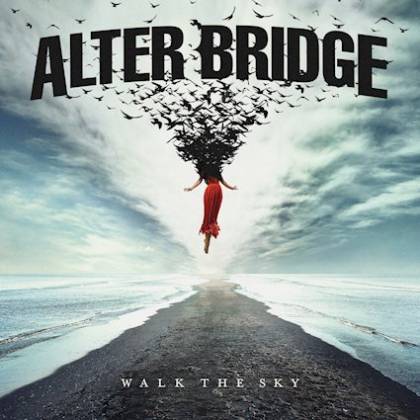 There's something disarming and very welcome about the sound of Myles Kennedy almost whispering his way through brief intro "One Life", because although ALTER BRIDGE have had plenty of subtle and downtempo moments over the years, their last album, "The Last Hero", was a near-remorseless barrage of bombast and overwrought emoting; an enthusiastic over-egging of the post-grunge pudding that was compounded by the Royal Albert Hall shows that followed, wherein a full orchestra added yet more layers of clangor and pomp to the experience. As sumptuous and entertaining as those performances undoubtedly were, it was hard not to leave the venue craving paracetamol and a lie down.

Superficially, Kennedy and his comrades have stayed true to their simple but effective initial masterplan from the start, but the versatility and lightness of touch that made early records like "Blackbird" and the flawless "III" so engaging seems to have become slowly weighed down and diminished by arena-filling heavy handedness. Not that ALTER BRIDGE have suffered a change in fortunes as a result, of course: the band's huge fan base will love "Walk the Sky" every bit as much as they have the band's previous six albums. The major difference between this and its overpowering predecessor is a subtle but clearly discernible looseness and swagger in the band's performances. It's as if they reached a peak of volume and heaviness and passed through to the other side, where groove, melody and sonic space are kings, and bursts of heavy metal thunder are used to contrast, rather than cudgel. Nothing radical has happened to the way ALTER BRIDGE write songs, but there is a breeziness to the flow of "Godspeed" and "Native Son" that feels fresh and new, and an inventiveness and sense of wide-eyed wonder in myriad ambient embellishments, all of which make this by far the band's most sonically interesting record to date.

Beyond that, how much you dig "Walk the Sky" depends entirely on how much you love what ALTER BRIDGE do. There are choruses piled on top of choruses, all of them designed to either raise the spirits or wrench tears from your eyes. MARK TREMONTI remains one of the unsung metal guitar heroes of the modern era, and here his strike rate for killer riffs is higher than ever (check out the murderous, slamming verse riff for "Take the Crown" for one great example!),while the aforementioned Mr. Kennedy sounds as fervently committed to every note and proclamation as ever, albeit with all-out histrionics kept to an efficacious minimum. His voice may be manna for some and kryptonite to others, but it would take a hard heart to deny that his vocal on the closer, "Dying Light", is a thing of gritty, soulful beauty.

Naturally, if you wanted more of the same, there's plenty of that here, but "Walk the Sky" is a smarter, sharper and more absorbing affair than anything ALTER BRIDGE have recorded this decade.