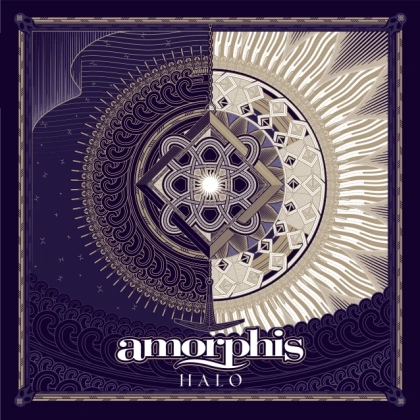 Rhetorical question coming up: has there even been a more underrated band than AMORPHIS? Despite being insanely consistent and unwaveringly singular for over 30 years, the Finns have never really fit neatly into any ongoing or newly revived category, and the result is that far too little attention is paid to the overwhelming quality of this band's music. Whether that will change when "Halo" reaches people's ears is debatable, but this is yet another tour de force. The album is yet another collection of intricate but emotionally supercharged metal songs, all steeped in the imagery and atmospheres of Finland's sacred Kalevala, but as punchy, timely and pertinent as anything else going on in modern metal.

Part of the magic that lurks on just about every AMORPHIS record is the way they have always written succinct, crafted songs that almost explode with ideas. Masters of the stirring, instantly memorable chorus, they have been on an extraordinary roll in recent times, arguably first inspired by the recruitment of frontman Tomi Joutsen for 2006's self-titled rebirth ("Eclipse"). "Halo" is simply the next in a long line of remarkable records, which from 2007's glorious "Silent Waters" to 2018's equally stunning "Queen of Time" have amounted to a sustained object lesson in consistency, attention to detail and great songwriting. Far from running out of ideas as they embrace veteran status, AMORPHIS sound as wide-eyed and vital as ever on what is their 14th full-length studio record. As always, Tomi Joutsen — also criminally underrated, incidentally — puts in a heroically versatile vocal performance, nailing every epic, clean refrain and out-growling all-comers. But it's the exquisitely eccentric flow and faultless dynamics of these songs that close the deal, and opener "Northwards" may be the most sublime showcase for this band's unique sound yet. There is a sublime, folk-tinged, earworm hook, a thunderous, darkly metallic verse, a life-affirming, fervently melodic chorus and a sumptuous, old-school prog mid-section. From ghostly intro to final, ribcage-rattling chorus, it's a five-and-a-half masterclass in heavy metal songwriting.

But then, as has been on the case on most of their albums over the years, so is just about everything else on "Halo". Too inventive to be beholden to a formula, but deeply entrenched in an aesthetic that has served them well for decades, AMORPHIS sound imperious throughout, and picking highlights is a game best left to label staff and algorithms. The truth is that every song here has the potential to stir the spirit, and every one of them contains a dash of esoteric ingenuity. Initial listens point to the strident melodies and raga-rock detours of "On The Dark Waters" and the seven-beat grooves and joyous chorus payoffs of "The Moon" as the album's most immediate moments. But this is an album of nuance and substance, and each song has tantalizing musical depths to explore. And that's before you get into the nitty-gritty of ancient Finnish folklore.

One inarguable pearl that gleams brightly on "Halo" is "Seven Roads Come Together". Aside from being epic, bombastic, subtly intricate and almost overburdened with great tunes, it's such a straightforwardly uplifting thing that, as with the rest of this fantastic record, you may just find yourself bursting into applause. Or tears. Either way, this is more than a bit special.