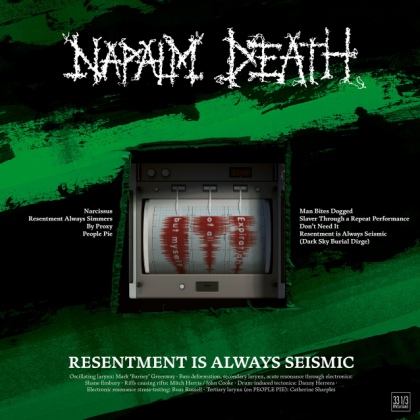 Resentment is Always Seismic — a final throw of Throes

Countless, revered extreme music acts release their best efforts at the onset of their existence, oftentimes just three albums deep. NAPALM DEATH, however, is aging like a fine wine. The grindcore progenitors released one of their best releases 16 albums into the act's career with 2020's "Throes of Joy in the Jaws of Defeatism". The Birmingham bruisers are now poised to release a follow-up mini-album, "Resentment is Always Seismic — a Final Throw of Throes", and it's clear that the seasoned veterans are on top of their game and as exciting as ever.

"Resentment Is Always Seismic…" is essentially a partner recording to "Throes of Joy in the Jaws of Defeatism". The SLAB! Cover, a stand out, was a bold choice, and NAPALM does justice to the industrial/electronic rock band's late eighties song. The selection shouldn't be too much of a surprise. The source track's rumbly bass-heavy and ambient nature go hand in hand with NAPALM DEATH's longstanding inclination for left-field, mind-bending music, and the unit has experimented with such specific sounds since "Fear, Emptiness, Despair" and "Diatribes".

The rest of the mini album includes five original songs and a cover of BAD BRAINS' "Don't Need It". Additionally, "Resentment is Always Seismic (Dark Sky Burial Dirge)" is NAPALM DEATH's take on DARK SKY BURIAL, at least in terms of spirit. (DARK SKY BURIAL is the newer, electronic solo project of NAPALM DEATH's ubiquitous and uber-productive bassist Shane Embury.) Just like the "Throes…" long player proved, "Resentment is Always Seismic…" takes their passion for some of the varied styles they've explored for decades to the next level. "Resentment Always Simmers", for instance, launches their ambient qualities to soaring heights with a profound sense of drama and melancholy.

The band dots the entire spectrum of tempo variety on the release, sometimes within the same song, and the diversity provides the kind of contrast and dynamics that keep things interesting throughout. "Slaver Through a Repeat Performance" is a masterful synthesis of their transcendental and melancholy drenched guitar melodies with their psychotic blasting passages. Indeed, NAPALM DEATH has not abandoned the furious and merciless grindcore that rests as the bedrock of the act's essence and identity. "By Proxy" is an absolutely acerbic slice of the ensemble's unhinged grind highlighting the collective's foundational hardcore element.

The legendary English group has always gone out on a limb. The adventurous, brave moves have most certainly paid off over time. NAPALM DEATH has never sounded so fierce and confident in its ability to flex its musical muscles across an incredibly broad cross-section of styles. If "Resentment is Always Seismic — a final throw of Throes" is any indication of what's ahead, NAPALM DEATH has a lot more to offer down the road, and the grindcore icons are still capable of expanding the boundaries of extremity.