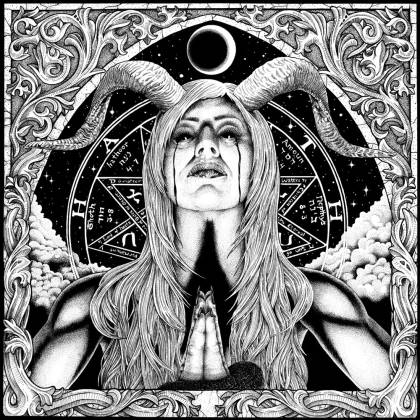 Hammer of the Witch

Two things you can count on with RINGWORM: freaking fast and double-freaking loud. You can also expect the Cleveland hardcore-thrashers to divvy out lyrical themes devoted to horror, nihilism, witchcraft, jackals and the king of the underworld. After all, the RINGWORM hell posse posits on their latest album "Hammer of the Witch" that one of us is going to die, so you might as well leave your skin at the door and die like a pig. Just another day in the metal underground, right?

CANNIBAL CORPSE these guys aren't, but RINGWORM have been mighty brutal in their own right for 23 years now and "Hammer of the Witch" (a title that summons images more related to a femme necromancer in the guise of Thor's beloved Lady Sif laying then robbing him of his trusty Mjolnir through a dark magic stronger than all of us) is no less fierce than their other albums.

Musically, "Hammer of the Witch" takes no evolutionary steps and it doesn't have to. RINGWORM have their sound perfected and every song on this sucker wallops at top speed with random mid tempo intros or breakdowns, all carrying equal weight as the thrashing parts. As ever, speed rules on "Hammer of the Witch", so it's difficult to single any one song as a standout since everything runs on nearly a continuum. "Dawn of Decay", "Bleed", "Vicious Circle of Life", "Die Like a Pig", "Leave Your Skin at the Door", take your pick for supreme 'core thrasher on this album. We can note that "I Recommend Amputation" ends on a gory soundbyte after RINGWORM pounds for all their worth with a thrifty breakdown that merges into the song without giving up the heft of the song's velocity.

The creeping plods of "We'll Always Have the End" are about as slow as RINGWORM allows themselves on this album and creeping is merely a subtlety. The song is still heavier than most bands calling themselves hardcore and it allows the screeching guitars of Matt Sorg and John Comprix (who plug their solos like mutant bee drones all over the album) plus Ed Stephens' gurgling bass to prevail in a somewhat dialed-back forum. Worry not, though; there are a couple of blitzed breakaways on the song to rattle you plenty.

The knocked-back moshes of the title track's choruses are hardly pauses amidst Danny Zink's double-kicked flailing, but they give the listener enough room to hear James "Human Furnace" Bulloch deride his titular sorceress as "Satan's bitch". Suffice it to say, the "Human Furnace" is in rare form. You'll be checking the back of your neck for phlegm wads as Bullock spits full force into the mike on "One of Us is Going to Have to Die". Make it quick, because the guitar solos come raging like a tempest on the back of Danny Zink's blasting beats. A clever mincing of a few doom bars in the midst of "One of Us is Going to Have to Die" keeps the listener invested through RINGWORM's tireless speed.

If you know RINGWORM, you know what you're getting. These guys never let anyone down and "Hammer of the Witch" is one of the heaviest death metal albums that's hardly death metal at all. Hardcore and thrash belong in this camp, because RINGWORM knows better than most how to exploit both at maximum impact.