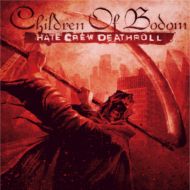 CHILDREN OF BODOM are one of those bands who are able to polarize random listeners instantly, with their melodic death metal framework somehow melded tight around guitar/keyboard harmonies and showboating that Yngwie Malmsteen and Jens Johansson made famous a good 15 years ago. Over the course of three studio albums, the Finnish quintet have continually built their worldwide fanbase, finding favor in the most unlikely of individuals (there's something inherently bizarre about watching the band's CDs fly off merch tables at hardcore festivals, picked up by kids in POISON THE WELL and STRIFE T-shirts).

On their fourth studio album, "Hate Crew Deathroll", the Northernmost Widdlers seem to have converted the anger shown in their lyrics over interpersonal relationships and channeled it into their music. There's a newfound intensity heard in some of the material, such as the scorching opener "Needled 24/7", which leaps off its harness from the opening seconds and only catches its breath long enough to interject a melody copied verbatim out of the Jesper Strömblad songbook. Even though a heavier mood prevails over the length of the nine tracks (the booklet also makes mention of a cover of SLAYER's "Silent Scream", which must have wound up on the Japanese version),that's not to say that the band have turned over a malicious new leaf. In music, you're either playing music which is predominantly angry or which isn't — and there's far too much musical virtuosity and light, dancing melodies on display here to be mistaken for true vitriol. But their dedicated followers will tell you that the appeal lies in their expert ability to weld the two styles together, and part of the fun is reveling in the schmaltz, using the more whimsical bits to break up the staccato riffs and Laiho's shrill, tolerate-'em-or-hate-'em vocals.

Once again, frontman Alexi Laiho shines as a young guitar talent, while Janne Warman is equally adept on keyboards, the two often playing cat-and-mouse with melodic interchanges, although Warman is far more likely to be responsible for those little flourishes and twinkly passages liable to make an extreme metal fan cringe. Laiho also ventures off the deep end with his leads on virtually every song, but he possesses a keen ear for melody and knows how to effectively string together a sequence of notes without losing the listener's ear.

Although the novelty of the band's approach bore diminishing returns for me with each successive release since their debut album, "Something Wild" (in terms of the novelty wearing off, as well as Laiho's vocals, and even their repetitious packaging),something about "Hate Crew Deathroll" grabs hold of me and even songs like "You're Better Off Dead" with its surprising gang-choruses of "Whoa-ohh-ohh" and double-tracked keyboard soloing, or lightweight song titles like "Lil' Bloodred Ridin' Hood", fail to dissuade me entirely from repeating the whole listening experience. This stuff is sure to have some people laughing their heads off, but it's superbly executed stuff and although they've drawn some imitators already (KALMAH?) at this point nobody can touch them.