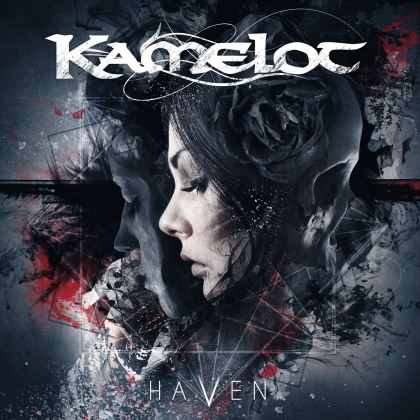 Thomas Youngblood and the KAMELOT crew are back following a successful transition on the mike from Roy Khan to Tommy Karevik. It's already been two and a half years since KAMELOT's last effort, the majestic "Silverthorn", albeit the band has now released four albums within the past eight years, hitting hard with another ambitious power metal project, "Haven".

Karevik resumes his post, endorsed by Youngblood as having exceeded expectations. "Haven" also features cameos by ARCH ENEMY's Alissa White-Gluz (who has toured with KAMELOT in the past providing backup vocals),NIGHTWISH's Troy Donockley and DELAIN's Charlotte Wessels. Thematically, "Haven" reflects dark times we're facing as a society, cited by Youngblood as "loosely about a grey cloud forming over our world."

The palatable "Fallen Star" is a grabber as Karevik sounds even more settled than he did on "Silverthorn". The choruses are as fancy as the choral supplements and thumping background percussion and KAMELOT goes right to the fore, hitting the fullest strides of musicality here and on the subsequent track, "Insomnia". The latter track's choruses are superbly emotive, which makes Thomas Youngblood and Oliver Palotai's shredded guitar and keyboard solos a bonus treat. Casey Grillo's throbbing beat and Sean Tibbetts's blower bass segment add to "Insomnia"'s full-frontal energy.

The slower, epic-driven "Citizen Zero" is darker but pushed with pounding theatricality as the song builds steam and layers the orchestral and choral samples atop Tommy Karevik's dramaturgical hymns. As would be expected on a modern power metal album, "Veil of Elysium" rages out of "Citizen Zero" like a tempest in the opening bars with oscillating, adventure-seeking guitars. The brisk-moving choruses sound like a metalled-up slice of Basil Poledouris' epochal "Conan the Barbarian" score.

Troy Donockley brings his Uilleann pipes and Charlotte Wessels her soothing chimes to the medieval-kissed ballad "Under Grey Skies". Later in the album, Alissa White-Gluz growls upon the ferocious "Revolution" and breathes dragon fire into the heroic "Liar Liar (Wasteland Monarchy)".

At this point, KAMELOT have a certain rhythm to their albums, which makes "Haven" a bit predictable, but in this case, predictable is a good thing. Oliver Palotai's placating chimes amidst the strident and melodic "My Therapy" adds to the song's illustriousness. The mid-tempo marcher "End of Innocence", placed within the middle section of the album, is an automatic mood transition leading into "Beautiful Apocalypse", which finds Tommy Karevik swooning to a more agro-based scheme. "Liar Liar (Wasteland Monarchy)" blares with tradeoff blast measures and slow-mincing power grooves, given cinematic embellishments and vocal gallantry from Tommy Karevik. The spine-tingling dénouement of "Liar Liar (Wasteland Monarchy)" is outstanding.

Power metal, symphonic metal, whatever you want to tag KAMELOT with, they've proven resilient, not only with their high-volume output, but their stellar craftsmanship. Tommy Karevik plays the voice of a contemplative deity on the sweeping ballad "Here's to the Fall" and his wreaking tones are divinity itself. Talk about exceeding expectations.