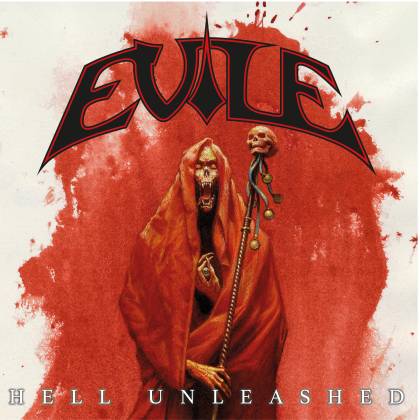 There is nothing subtle about EVILE's extremely welcome return to action. And that's just the way we like it. The UK quartet's Fleming Rasmussen-produced debut "Enter The Grave" (2007) swiftly established them as a major force in the ever-so-slightly cynical and label-led thrash metal revival that was happening at the time. Both "Infected Nations" and "Five Serpent's Teeth" hammered their superiority home, and 2013's "Skull" at least appeared to offer a fine and ferocious flurry of notes to go out on. The departure of frontman MATT DRAKE last year would have put a noisy period point at the end of most band's stories, but the very welcome return of talismanic lead guitarist OL DRAKE, after a two-year absence, solves that problem instantly, particularly since the latter has now assumed vocal duties too.

Beyond that tumultuous but tidy shuffle of personnel, EVILE return sounding even more focused and bullshit-free than they did first time around. Several shades more brutal than anything the Brits have released before, "Hell Unleashed" embraces the more extreme, deathly side of thrash while maintaining unbreakable links to the classic, post-METALLICA classicism that made EVILE's early albums so undeniable. One key factor is that OL DRAKE's voice sounds closer to Cronos or Schmier than to his brother and former bandmate's, which gives the relentless battery of songs like opener "Paralysed" and the seething "Disorder" an exhilaratingly German edge, as if EVILE have been newly possessed by the spirit of early SODOM and KREATOR, which can only be a good thing, as you will doubtless be aware. Unlike those primitive Teutonic influences, however, EVILE are tighter than a prairie dog's turd-pipe and firmly entrenched in the punishing precision of modern metal.

"Hell Unleashed" is an album brimming with moments that sound precision built to send thrash metal fans into a state of hysterical ecstasy. The slamming, staccato insanity and sudden shifts of pace are enough to make Paul Baloff's head spin. In particular, "The Thing 1982)" pays tribute to one of the greatest movies of all time at deranged full pelt, before dropping down to a brooding groove for the first half of a stunning solo from Drake. The second half of the solo is delivered over with faster-than-SLAYER insanity, before yet more on-the-head-of-a-pin athletics and a dead-stop finish that should have discerning folk leaping from their sofas in appreciation. Elsewhere, a cover of MORTICIAN's "Zombie Apocalypse" is a stroke of mischievous genius, partly due to the novelty of actually being able to hear the lyrics in a MORTICIAN song, but also because — and who knew? — it's a sublime chunk of sludgy thrash that fits perfectly with everything else here.

Wisely delivering a succinct, sub-40-minute slab of no-nonsense ferocity as their returning statement, EVILE reappear sounding every bit as commanding and unstoppable as they did over a decade ago. "Hell Unleashed" ends with its title track, and it's a near-perfect 21st-century thrash anthem that rips with a fire and fervor that bodes extremely well for this reborn band's future. Bow down to the thrashers, again.