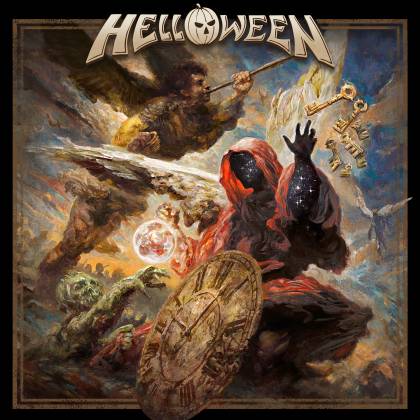 One of the most critically acclaimed recent live tours was HELLOWEEN's "Pumpkins United" run. The union of Andi Deris, Kai Hansen, and Michael Kiske sharing stages for the first time allowed the group to perfectly replicate every era of the band's storied career, and the post-show reactions from their fan base seemed to be of pure elation. That energetic excitement carried over into the announcement that the band's album after the completion of the tour would also feature appearances from all three vocalists.

First off, we do have a word of warning to HELLOWEEN's most die-hard fans: The returns of Hansen and Kiske to the fold did not result in a full-scale resurrection of past glories. If you were expecting the band's latest effort to stand side-by-side with the original "Keeper of the Seven Keys" records, your expectations are too high. That said, HELLOWEEN's self-titled effort is bookended by two incredibly majestic epics that are destined to become audience favorites, with a big serving of the mostly hard-driving anthemic rockers that the modern era of HELLOWEEN has excelled at — and continues to excel at — in between.

There was a lot of speculation as to how the three vocalists juggling act would play out. Instead of awkwardly placating egos and allowing all three vocalists to evenly play lead singer throughout the album, the group instead commandeered vocal duties based on the needs of the songs as they were written. The majority of lead vocal duties are handled on the record by Deris and Kiske, with Hansen popping in here and there. The Deris and Kiske duo has tremendous chemistry when their individual strengths are being played to on tracks such as "Fear Of The Fallen", an energetic anthem that sees Deris's ability to croon in the lower end played off of by Kiske soaring for the skies, and both amplified by Hansen in the chorus. This dynamic also comes off especially well during "Angels"'s DREAM THEATER-esque aggro-prog.

The true gift of having all three vocalists working together comes on the gloriously harmonic choruses that are present throughout the record. Deris, Hansen, and Kiske's harmonies all beautifully coalesce together on the majority of choruses, from the album-opening glory that is appropriately titled "Out For The Glory" through "Skyfall"'s album-closing sprawl, which itself is a grand finale that honestly comes off as a coda carrying the emotional strength of the film of the same name by the time it reaches its thrilling conclusion. The strength of these choruses also elevates straight-forward rockers such as "Robot King".

Hansen's presence may be felt in a more subtle way than his peers behind the microphone, but another boost from his return to HELLOWEEN is to the band's overall guitar sound. Michael Weikath has been a consistently strong guitar presence since the group's early days, and Sascha Gerstner has also had plenty of moments to shine during their post-2000 output. Hansen's axe capabilities are seamlessly interwoven alongside those of the existing duo, with plenty of tracks allowing all three guitarists a moment to shred, most notably on "Mass Pollution".

Deris has more than earned the acclaim he has received for his own performances as lead vocalist during the back half of the group's career, but it is undeniable that Hansen and Kiske's return provides a jolt of energy that is felt throughout HELLOWEEN's latest record. The fact that both the album opening and album closing tracks are epics sure to please even the most hardened veteran fan, and that the presence of all three vocalists embellish the less sprawling rockers in-between, one can only hope that this vocal-trio lineup of HELLOWEEN remains permanently etched in stone for the long-term future.