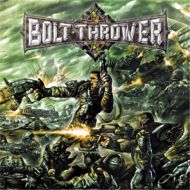 There was a time when Britain's BOLT THROWER were looked upon as one of the country's finest extreme metal exports—a band that, along with NAPALM DEATH and CARCASS, appeared the most likely candidate to give the Yanks a run for their money as the second death metal wave swept the globe in the late '80s. Some 10-11 years later, BOLT THROWER are nothing but a hollow shell of their former selves—a group merely content with rehashing their old riffs endlessly while spouting war-themed lyrics that verge on self-parody.

In musical terms, this is about as vintage BOLT THROWER as it can get: plenty of double-bass sections interspersed with the typical harmony guitar riffing style that had become the group's trademark. New vocalist Dave Ingram (ex-BENEDICTION) does a fine job of staying true to the monotonous delivery of former frontman Karl Willetts, and the songs generally sound interchangeable, with most of the tracks following the same basic formula that has been all but beaten to death over the course of the last few BT full-length offerings.

Unlike the group's early '90s efforts, which were helmed by veteran knob-twiddler Colin Richardson, Honour Valour Pride is a self-produced affair (with assistance from Andy Faulkner),which has resulted in a noticeably less punchy and powerful sound than was the case in the past—even further diluting the effectiveness of the band's delivery.

Considering BOLT THROWER's track record, it is highly unlikely that the group will be able to come back after this musical abortion with an effort that will live up to the promise the group showed over a decade ago. For all intents and purposes, Honour Valour Pride is the sound of a band on their last legs, with nary an inspired idea to make this a particularly enjoyable listening experience for anyone but the least discriminating of death metal fans.