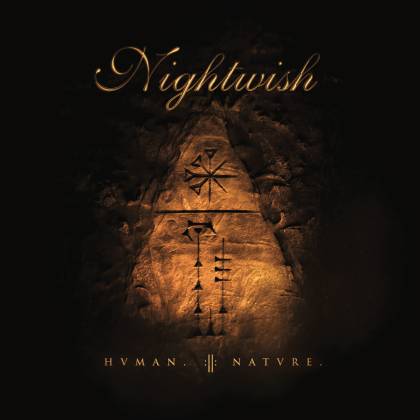 From their massive international fanbase to the flagrant extravagance of their music, everything about NIGHTWISH is righteously, riotously big. Easily one of the biggest metal bands on the planet and clearly riding a wave of creative momentum, they would have surprised everyone a lot more if they had made a new album that wasn't even more artistically aspirational and over-the-top than its predecessors. Frankly, after the widely acclaimed progressive splurge of 2015's "Endless Forms Most Beautiful", nothing short of a musical apocalypse choreographed by Walt Disney is going to fit the bill right now. Fortunately, NIGHTWISH have never been in the business of aiming low and "Human. :II: Nature." smashes its targets with ease, while somehow sounding like a brave new chapter for the band at the same time. If you want big, it's definitely here, but this is the most intimate and emotionally resonant record NIGHTWISH have ever made, too. They're a clever bunch.

If you're a fan, you will already have heard the singles: the thunderous and edgy "Noise" and the twinkly eyed, folk-drenched "Harvest". Both were clear forward steps from the occasionally self-conscious opulence of previous records — NIGHTWISH sound so collectively at ease these days, that despite sounding like a vast amount of money has been spent on making this all sound overpowering and colossal, "Human. :II: Nature." is subtly rich and warm in sonic terms, too. In fact, it truly sounds like a real, red-blooded band in action. The orchestral and atmospheric embellishments that are so integral to the NIGHTWISH experience are here in abundance, of course, but it's beauty and intensity that dominate, rather than mere empty bombast. "Procession" and "Shoemaker" are both grand showcases for Floor Jansen's magnificently versatile voice, but her presence is used sparingly and with lethal efficacy. In the former, her blissfully melodic narrative is cleverly woven through an ever-changing, wildly dynamic landscape that builds into a very fine metal song, but which could have easily veered off in an entirely different direction. The latter is simply spellbinding. Meanwhile, the hook-laden "How's The Heart?" is almost obscenely memorable and sweetly touching.

A sense of spontaneity, and perhaps freedom, is more apparent in Tuomas Holopainen's songwriting here than ever before. Opener "Music" is simply dazzling, a mini-symphony that gently redefines the NIGHTWISH sound across seven epic minutes; "Tribal" is four minutes of pure dark melodrama and one of the heaviest things NIGHTWISH have recorded in a long time: where the band of "Century's Child" and "Once" sounded pristine but sometimes distant, "Human. :II: Nature." is fully present and surprisingly fiery. Part one closes with "Endlessness", a gripping, prog metal epic with both Jansen and Marko Hietala in supreme vocal form and enough low-end crunch to keep most recalcitrant metalheads intrigued.

As observant folk will be well aware, the second half of NIGHTWISH's ninth studio album comprises 30 minutes of instrumental, orchestral music. The band's "love letter to planet earth" is definitely not going to send every metalhead spinning in an ecstatic froth, but if you've followed the NIGHTWISH story up to this point, it's a sumptuous, poetic and deeply romantic celebration of the great outdoors, full of soaring melodies and moments of spine-tingling tranquility. The absence of the humanity that informed the album's first half is deliberate, of course: as much as NIGHTWISH are being indulgent here, this is also music that promises to soothe frayed psyches and to deliver some much-needed serenity and calm in these most troubling of times. It might even inspire a few people to become more ecologically enlightened. Either way, Finland's symphonic standard bearers have just made the most ambitious record of their career and it may well be their very best, too.