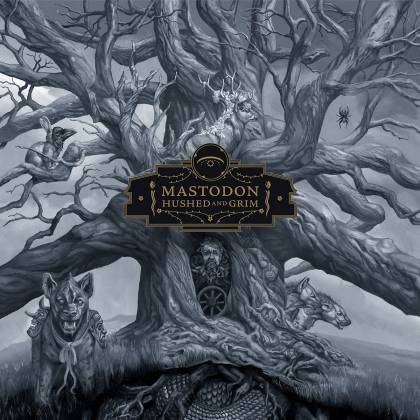 Headier moments of psychedelics and progressive-metal noodling have always been baked into MASTODON's sound, going back to the more overtly doomier days that birthed their 2002 debut, "Remission". The last decade of the band's career has seen the Atlanta, GA quartet wade further into those more adventurous waters. What has helped MASTODON remain a formidably enduring metallic presence — where lesser bands might have tripped and stumbled — is the fact that those forays into flightier moments of musical fancy are still undertaken in the service of keeping the band's sound grounded in more ominous territory. The group's progressive-metal indulgences aren't DREAM THEATER's technical showcases, nor do they evoke modern-day OPETH's flowery atmosphere, but the end results are still incredible displays of metallic aura. And "Hushed and Grim", the band's ninth album, comes off as the ultimate fitting of the puzzle pieces that MASTODON has been arranging during their later years.

"Hushed and Grim" is a dense 86-minute, deep dive that delivers a listening experience that is at times dizzying and manic, other times brooding and introspective, but ultimately remains moody and haunting. The powerful drum-roll from Brann Dailor and swirling riffs that launch the album on "Pain With an Anchor", jazzier guitar solos dropped during the back half of "The Crux", and the GOJIRA-esque combination of hypnosis and power of "Sickle and Peace" all converge early to lay a solid foundation for the winding trip that is about to come. Longtime MASTODON fans who like to get a moshpit going at the live show will still find plenty of reasons to do so if the band chooses to integrate into their set list the forceful crunch of "More Than I Could Chew", the fast-paced chaos of "Pushing the Tides", and the whirlwind thrash that launches "Savage Lands".

The most engaging aspect of MASTODON's 2021 sound that really keeps the proceedings of "Hushed and Grim" rooted in emotional heaviness is bassist Troy Sanders's vocal performance. Whether it's by design or the natural strain of age, the tortured howls of his sound result in what may be his most compelling vocal performance. Sanders rasps work in conjunction with hearty bellows from guitarist Brent Hinds to lend a weight that keeps the dark blues-rock balladry of "The Beast" from coming off as a maudlin farce. Sanders's weathered shrieks and emotive keyboard work also bolster "Skeleton of Splendor"'s spooky synth-prog as well as "Dagger"'s thunderous torment. Dailor also impresses with soaring melodic lead vocals on "Teardrinker"'s relatively straight-forward rock, but Sanders's beautiful throat-shredding performance on "Gigantium"'s epic closing comedown can't help but leave the lasting impression after initial listens are completed.

The last decade of MASTODON releases have seen the band steer their songwriting towards more musically explorative waters. Every subsequent full-length album ends up being more and more of a winding path of twists and turns as start-to-finish listening experiences. The entirety of "Hushed and Grim" makes a strong case that their latest is the band's ultimate masterpiece, successfully steering into every single curve that is laid down on the road ahead of them.