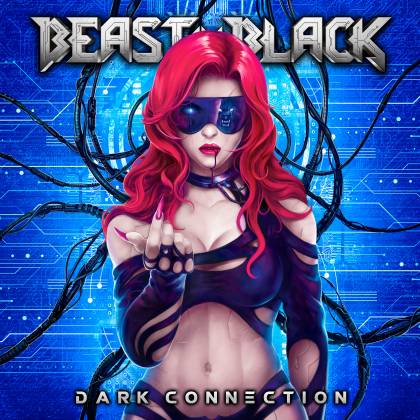 Following his 2015 departure from Helsinki's renowned BATTLE BEAST, guitarist extraordinaire Anton Kabanen launched BEAST IN BLACK, a project that is equally if not more over the top in its forwarding of unabashed heavy metal thunder. The unit's first two albums, 2017's "Berserker" and 2019's "From Hell With Love", have been revered globally by power metal fiends, to say the least. BEAST IN BLACK is essentially a household name in Finland where the aforementioned releases both reached platinum status. In the face of high expectations, BEAST IN BLACK delivers on their third outing, "Dark Connection".

BEAST IN BLACK didn't have a sophomore slump following its impressive debut, and "Dark Connection" truly does meet the high-water mark left by the initial releases. True to the band's fundamentals, "Dark Connection" is bursting with absolutely blistering riffs and guitar work, which are combined with deeply infectious vocal work and choruses. "Blade Runner" opens things up with a brief but memorable keyboard driven intro that adequately teases, creating an element of tension before the band unleashes crisp and bold pop-laden heavy metal. The song is replete with Yannis Papadopoulos's impressive vocals, which comfortably and tastefully reach toward the heavens when it's time to unleash that glorious falsetto. But follow-up track "Bella Donna" does an even better job of representing BEAST IN BLACK's essence, a beautiful marriage of impassioned eighties-inspired heavy metal and crystalline pop music.

Along with bleeping sounds signifying some form of aircraft or spacecraft, "Highway To Mars" begins with the apparent utterances of a stewardess making announcements regarding a city on Mars. Such augmentations lend the musical experience a cinematic quality. Elsewhere, "Hardcore", a song that's ironically lightweight, moves forth with a prominent swing. "Moonlight Rendezvous" stands out due to the decidedly calmer nature and flow. And while the MANOWAR cover, "Battle Hymn", makes sense considering the ensemble's style, BEAST IN BLACK throws a complete wild card on the table with their MICHAEL JACKSON cover, "They Don't Care About Us". The song choice is logical considering BEAST IN BLACK's pop music inclination, and the bold move pays off proving to be one of the album's strongest cuts, adding considerable depth and dynamics.

With "Dark Connection", BEAST IN BLACK wisely chose to employ the "if it ain't broke, don't fix it" approach. Now that they are three albums deep, the band seems comfortable in its stride. What's more, the moody and slower-tempo songs, as well as the MICHAEL JACKSON cover, collectively drag the BEAST forward as a band, ever so marginally yet noticeable enough. The album flows mellifluously in terms of sequencing and because of the thematic science fiction-inspired similarities. There's a sense that BEAST IN BLACK has the potential to reach into the American pocket of mainstream music. Whether or not that happens with "Dark Connection" doesn't matter, though. At the end of the day, in terms of art and creativity, BEAST IN BLACK has hit the ball out of the park with album number three.