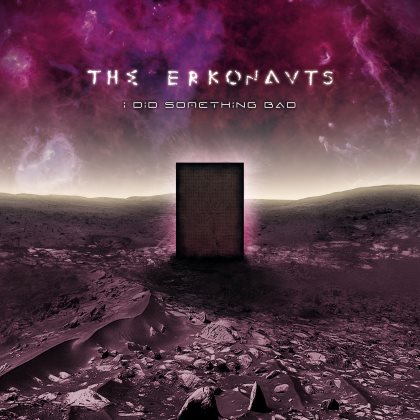 I Did Something Bad

Okay, so toward the end of the month when your ol' pal Ray is nearing the finish of his monthly review queue, it's not only appreciated but genuinely thanked aloud with nobody but his bemused little boy in the room when an album goes the extra mile to keep his attention receptors alert. Admittedly, reading over the track playlist of THE ERKONAUTS's debut album "I Did Something Bad", I made sure this sucker got into the load for the opening song title "The Great Ass Poopery" alone. Yeah, I said "load," Beavis, heh heh, huh, heh heh…

The thing is, THE ERKONAUTS—made up of former members from SYBREED, 7-TONE and DJIZOES—really aren't the jugheads they'd lead you to believe. "I Did Something Bad" is a really funny title, but this unit takes its music pretty damned seriously. If there's a monster compliment this band deserves above all, it's for its brilliant variations. Seriously, this album's all over the place and it's wonderful.

"The Great Ass Poopery" rages "like a cheesed-off berserker with flurrying bass lines from Ales Campanelli, but there's very little tongue-in-cheek to lyrics such as "It's gathering of vultures, the branding of the future, it's the incoming voice we hear when we don't want to." "Tony S" mashes MASTODON with your favorite droning post metal band, heaping tons of sweat all over the melange. Salud! Ales Campanelli and Vinch Cerutti take the fore on "All the Girls Should Die" (previously released as a single),with a monster shake courtesy of Campanelli's relentless bass picks and Cerutti's clobbering rhythm. One almost forgets to key in on the revolving riffs by Bakdosh Puiatti and Fred Di Limoncelli, because Ales Campanelli is a tremendous singer and steals "All the Girls Should Die" with his bass and voice.

Ales does this again with his plucking party on the step-jived "Nola" and the driving "Dominium Mundi". His aggressive thrumming matches his screeching anti-war protests. Campanelli's rapid-snapping string tickles on "Dominium Mundi"'s breakdown are super snazzy. Here Bakdosh Puiatti and Fred Di Limoncelli turn up the heat with dense guitar chords bordering on doom. "Dominium Mundi" is thus one of the heaviest songs you'll hear all year.

It's easy to laugh at a song called "Hamster's Ghosthouse" but the riffs here are freaking huge. as is Vinch Cerutti's plowing rhythms, even when playfully working them up on the verses. The guitars and bass immerse the song before striking its apex. The progressions are sublime, particularly when hitting a long and distrait PINK FLOYD interlude.

The acoustic sway of "Your Wife" presents a vicariously sarcastic jibe about married life that means more if you've tied the knot for more than five years. The whumping thrash of "9 is Better Than 8" (one of most truly hilarious songs on the album) is like "Sesame Street" for metalheads. Beginning with a ukulele intro, this one rips the shit out of everything in sight, including the lid off of Oscar's trash can. If you're of the right generation, can't you picture this song crashing the funky countdown on those pinball cartoons, i.e. 1 2 3 4 5…6 7 8 9 10…11 12…?

Campanelli's fellow SYBREED mate Kevin Choiral, plants drums on the two bonus tracks "Machine" and "Culbutos", the latter being whumped to death by Choiral for nearly a minute and a half before any vocals manifest. Choiral lays down some wicked bass drum blats and crashing snares while Bakdosh Puiatti and Fred Di Limoncelli buzz all over him all while Ales Campanelli intermittently batters his bass overtop the pounding lunacy.

THE ERKONAUTS could've been a fleeting joke by name alone, but then again, so could've OYSTERHEAD. Ales Campanelli isn't quite Les Claypool, but he's hardly a slouch on the bass. Campanelli and his troupe have just enough of Claypool's shtick to fool you into believing they blow raspberries more than they blow speakers. Spin this shit and find out otherwise.