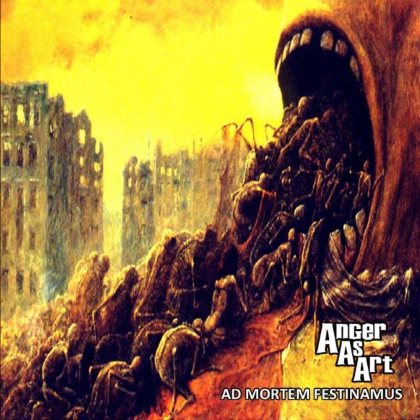 So that's four words; semantics. Even a metal yeoman will automatically parallel such lowbrow phraseology with thrash. Pasadena retro-speedsters ANGER AS ART return with its fifth LP after gaining some underground notoriety with 2013's "Hubris, Inc." If you don't grasp that ANGER AS ART is about as serious as Buzz Lightyear with an actual buzz by its geek-chic acronym A3—much less its less-than-subtle hike of the RAMONES's presidential seal jibe—then bounce on outta here already.

Gauging the song titles from the band's new album, "Ad Mortem Festinamus" (Latin for "We Hurry Into Death"),like "Pissing On Your Grave", "Aim for the Heart", "Hammer, Blade and Twisting Fire", "Praise of the Firehead" and, naturally, "We Hurry Into Death", ANGER AS ART is part shlock on top of thrash revivalism. Consider the nutty Dave Mustaine impression dropped into "2 Minutes Hate" like an in-joke. Consider as well that the song clocks in at double the time, 4:24.

Though it takes slogging through a few hiccups and sloppy deliveries before "Ad Mortem Festinamus" gets its act together, A3 pulls its strings tight by the fifth song, "L.A. State of Mind", and then rips this album to shreds—for the most part. At least the SLAYER and EXODUS-dug "Pissing On Your Grave" rages and ralphs satisfyingly enough to keep listeners invested for a decent payoff later on. The 6:40 minute "Tombward" has many itches and many ill-advised signature drops, but Steve Gaines and Danny Oliverio's swarming guitars are worth hanging out for.

While the 2:09 "L.A. State of Mind" is hardly perfect, it catches stride as a thrashier haul of early LIZZY BORDEN with plenty of profanity to get listeners off. From there, "Ad Mortem Festinamus" dials in. "Unknowing, Undead" is one of the tightest thrash tsunamis on the album. This prompts the listener to ponder if this cut and those following were given more attention than their predecessors—or perhaps laid down well in advance.

ANGER AS ART's best material is toward the center of "Ad Mortem Festinamus". That is where this album lights up; right down to Eric Bryan's rattling bass plugs on the NUCLEAR ASSAULT-derived "Hammer, Blade and Twisting Fire". Even Rob Alaniz's confident double-hammer strides here are bipolar to the messy drops and sputters in the early part of the album. Ditto for his vigorous trouncing on "We Hurry Into Death". Whereas Alaniz stymies his grind spritzing in the earlier part of the album, here he's more fluid. He maintains that fluidity even while the guitar parts teeter at times despite peaking where they're supposed to during what becomes another six-minute marathon. Considering "Dim Carcosa" likewise pushes too far at a lengthy 6:24, despite a nifty organ-fugue intro, the second problem with "Ad Mortem Festinamus" has to do with knowing how much fat to leave hanging, which leaves ANGER AS ART branded guilty to a fault.

For a fifth album, it's surprising that ANGER AS ART has the issues they do here. Nonetheless, when this album clicks, it clicks. The guitars can be phenomenal at times, the chords as nasty as any self-respecting metalhead could ever ask for. A3 hardly takes its craft (not art) seriously on the front, but the acoustic ringlets and power balladry guiding the foolishly titled "Praise of the Firehead" indicates a ply to belong to something other than a tongue-in-cheek throwback band. ANGER AS ART has a lot to offer, but "Ad Mortem Festinamus" nearly rushes in its own demise trying to be cleverly clownish and progressive while trying to keep up with the band's doofy slogan.