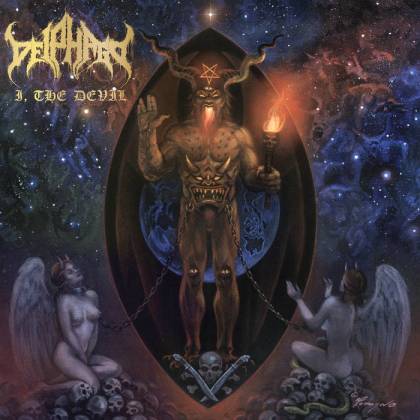 The belligerent blackened death metal lunatics who are collectively known as DEIPHAGO have been kicking out the evil jams for three decades now, including the directly connected precursor bands SATANAS and BAALZEBUL, as well as the one year they marched under the similarly spelled moniker DEIFAGO. Originally based in Manila, the Filipino band has since relocated to Costa Rica. Sure, they may not have the name recognition of the likes of MORBID ANGEL or DEICIDE, or even that of bestial beasts BLASPHEMY and BEHERIT, but the trio is responsible for some of the most maniacal, dark extreme metal that has ever been made. DEIPHAGO marks its 30th year of existence with the release of what will inevitably be one of the 2019's best, most unique and intense extreme metal albums. And, impressively for a band running this deep into its career, DEIPHAGO has just released its best album with "I, The Devil".

The sounds and styles they've covered on the previous four full-length albums, EPs, demos and comps have been familiar enough for seasoned extreme metal aficionados. But DEIPHAGO has made waves because of the band's utterly savage interpretation of black, death and war metal. DEIPHAGO is essentially what sounds like the amalgamation of SODOM, SARCOFAGO and SLAYER fueled by an unholy cocktail of crack and steroids. With "I, The Devil", DEIPHAGO continues to push the envelope, but this time they blast boundaries away as they take its tested frantic, violent, hyper-speed translation of extreme metal and inject it with the added elements of jazz and noisecore. It isn't likely that there were any direct musical cues from the likes of CONVERGE, though faint similarities are present. Interestingly enough, CONVERGE's Kurt Ballou produced the album, adequately capturing the raw, organic edge of the thoughtful yet frantic band.

"I, The Devil" begins with an epic and cinematic, symphonic intro that likably offers a sense of build-up toward the absolutely explosive onslaught that erupts with "Quantum Death". DEIPHAGO was unhinged and a bit out of control in the early days, but "I, The Devil" finds the trio in a position where they've become able to control the chaos and madness. The act's ability to sculpt sound and play with dynamics has reached a level that few would have imagined possible before. And when the tension has reached a boiling point—as it does midway through "11:4:6", for instance—DEIPHAGO not only knows when to let go and unleash an absolute maelstrom of blasting rage and mayhem, they preface the assault with powerfully dramatic transitions. Simply put, for those who want to see violent, extreme music push itself into new terrain, look no further than DEIPHAGO. "I, The Devil" is one of the best and most interesting extreme metal albums of the year.