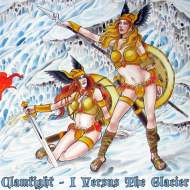 I Versus the Glacier

At first glance, levity seems a natural, dominant feature of CLAMFIGHT's sophomore album, "I Versus the Glacier" - just look at the Viking pin-up girls gracing that cover art and, well, the band IS called CLAMFIGHT!

But, as was similarly the case with the New Jersey quartet's first opus, released some two years prior, once the needle hits the groove Norse maidens and unicorns prove entirely at odds with the group's aggressive and oftentimes even despondent sound - a mixture of sludge, doom, hardcore, thrash, and more.

Indeed, like everyday working stiffs who finally let their hair down at the bar once their daily shift is through, CLAMFIGHT seem to be (almost) all business at the "office"; and the bruising noise rock churn with which album opener, "The Eagle" (a living tribute to UNSANE, if ever there was one) punishes listeners is but the first indication of this deadly serious approach.

Later, towards the rear of the LP, hypnotic slow-pokes like "River of Ice", "Mountain" and "The Green Gods of Yag", go on to explore this style further, weaving in unsettling melodies and even sweltering leads that don't interfere with the consistently masochistic results; but in-between, the members of CLAMFIGHT display multiple musical personalities which, as hinted above, give "I Versus the Glacier" much more to write home about.

For you see, metal, not hardcore or (perish the thought) indie rock, informs the bulk of this material, with second tune, "Sandriders" (inspired by Frank Herbert's Dune books, it would seem),setting the tone via metallic riffs, classic rock sensibilities, and a few stoner hallmarks to boot - only to be trumped immediately in the viciousness sweepstakes by the ensuing "Shadow Line", which comes replete with savage growls bordering on the HIGH ON FIRE/BLACK COBRA/BISON B.C. aesthetic.

Moving right along, the title track throws some doom into those classic rock templates and then simply cranks the engine well into the red, while "Age of Reptiles" arguably meshes the best of both worlds with its hypnotically precise riffing ever on the verge of losing control as tempers flare just beneath the surface.

And still, it works!

In the end, it's precisely this curious dichotomy of sound - the metallic and punk/hardcore strains, shared equally by epic closing number, "Stealing the Ghost Horse" - that simultaneously distinguishes CLAMFIGHT, and confuses their intentions somewhat - but only if you're thinking about it too much (as a reviewer unfortunately must) instead of just listening to the music already.

We recommend you do just that and leave the stressful analysis to us.