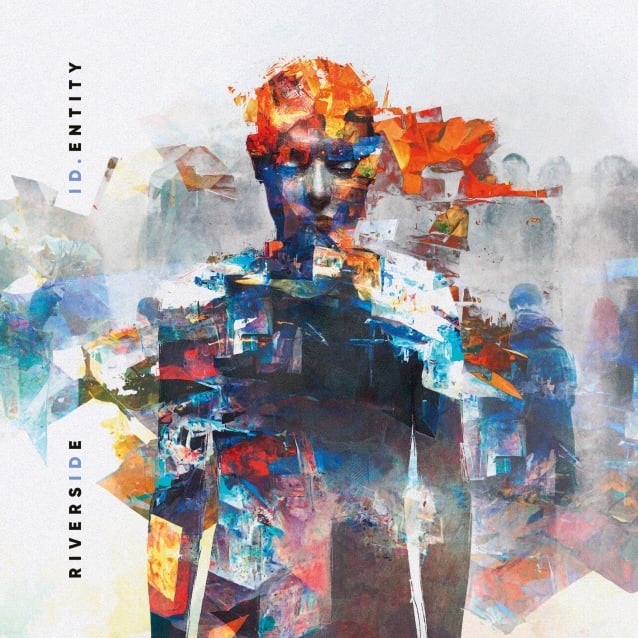 Stalwarts of progressive rock's resolutely modern wing since the turn of the century, RIVERSIDE have made a virtue of adaptability. The untimely passing of guitarist Piotr Grudziński in 2016 could easily have derailed the entire project, but the Polish crew's stubbornness and creative verve saw them safely through 2018's "Wasteland" — an album that honored a fallen comrade, while pushing RIVERSIDE's music gently outwards in multiple directions. Led by frontman and chief songwriter Mariusz Duda, they arrive at their eighth full-length album bloodied but unbowed, with their experimental urges firmly centerstage.

An album seemingly designed to reflect the modern world's confusions and conflicts, "ID.Entity" is modern prog in excelsis. RIVERSIDE have always been an intensely individual band, and despite an obvious kinship with the UK's PORCUPINE TREE, Duda's songwriting has its own distinct, melancholy and often acerbic flavor. Opener "Friend Or Foe?" confirms it: a gleaming synth motif gives way to big, crashing power chords, before a gleaming, '80s-influenced krautrock pulse sets the song's core tone. The song itself is a beast: shimmering, synth-led throb in the verses, fiery chord stabs and sonorous harmonies in the chorus, and a general sense of queasy concern, offset ever so slightly by the immaculate sheen of RIVERSIDE's collective delivery. Gorgeous and edgy, it's one of the most striking things Duda has ever written.

Next, "Landmine Blast" ups the tension, with an angular, twitchy rhythm and some TOOL-esque bass licks. The album's shortest track, it is also its most overtly rock moment, despite being palpably weird too. A timely riposte to the undue influence of Elon Musk and his odious peers, "Big-Tech Brother" shuffles in on a lissome, jazz-tinged groove, before veering off into some classic prog bombast, rampant Hammond organ included, which ushers in a wonderfully fragile Duda vocal and a jittery, prog-metal freakout. "Post-Truth" is superficially more straightforward, but crams in plenty of 7/8 groove and stuttering, syncopated riffing from Duda and comrades Piotr Kozieradzki (drums) and Michaeł Łapaj (keyboards).

A towering centerpiece that expands RIVERSIDE's vision with fearless abandon, "The Place Where I Belong" is stunning. Over 13 mellifluous minutes, the Poles take the scenic route through dreamily psychedelic acoustic beginning to a darkly funky bedrock upon which Duda spits out his sardonic pleas for unity and reason. At the seven-minute mark, the song dissolves into a stark elegance that slowly builds towards a mesmerizing, post-Floydian denouement. Impressively, the six-minute "I'm Done With You" is somehow even better, as RIVERSIDE cleverly mix old- and new-school prog vibes, and Duda announces the death of a friendship with deadpan flair. The closing "Self-Aware", with its robust rock gait and delicious detours into an almost roots reggae-like groove, provides "ID.Entity" with a suitably downbeat and dynamic finale.

Inventive, stylish and unpredictable, RIVERSIDE's eighth album matches the quality and class of its predecessors, and offers some refined, spot-lit insight into where the band may go next. The sound of progress? Unquestionably.