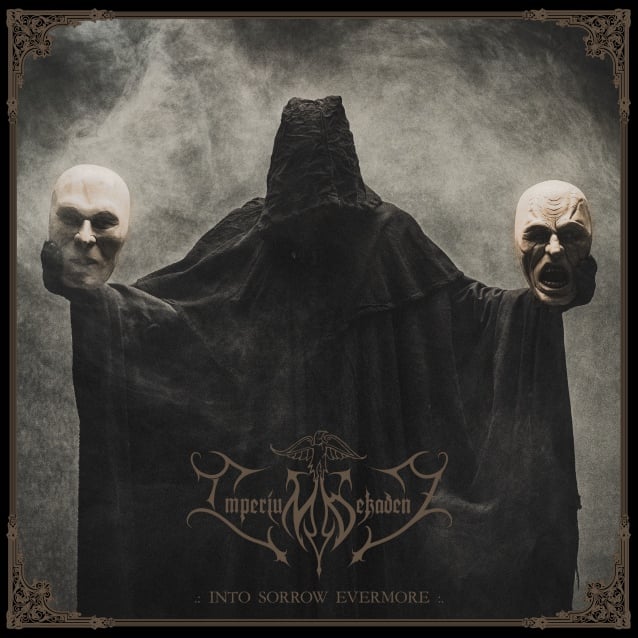 In terms of 21st century black metal, few bands have been so consistently praised as Germany's IMPERIUM DEKADENZ. Justly acclaimed, from their 2006 debut "…und die Welt ward kalt und leer", right through to the big(ger) budget uproar of 2019's "When We Are Forgotten", the duo have secured their own niche within the wider underground metal realm, with a sound that combines the eerie majesty of the finest atmospheric black metal with the lofty ambition and indulgent delivery of the genre's heaviest, second wave hitters. The band's second record for Napalm, "Into Sorrow Evermore", seems likely to stand out from this year's inevitable plethora of new BM releases, because it radiates haughty detachment from any and all competition.

Shimmering ambient ooze is the starting point, as the title track meanders ethereally into action. When the first wave of choking blastbeats erupts, the holistic allure of IMPERIUM DEKADENZ's sound is brought into sharp focus. This is black metal at its most stubbornly overwhelming, forged via night skies and wintry forests, but still underpinned by true heavy metal power. Seven minutes whizz by in what seems like half the time, and as vocalist Horaz's disembodied shrieks and growls emerge from the dense, buzzing throng, this band's unearthly might is hard to dispute. As if to consolidate, "Truth under Stars" takes a similar tack: a raging black metal avalanche, with pitch-black beauty at its heart. "Aurora" is more adventurous, and one of the album's high points. Beginning in fury, it switches from lachrymose dirge to finessed, ambient respite with free-flowing ease, returning to slow-motion moroseness for a spine-tingling endpoint.

Elsewhere, "Awakened beyond Dreams" wins the prize for most punishing and undeniable wall of scabrous sound. IMPERIUM DEKADENZ have mastered the timelessness that defines the best atavistic black metal, and as the song's eight minutes ebb and flow, the effect is disorientating in the best possible way. Simultaneously arcane and grandiose, it hinges on interwoven melodies and the persistent power of a lethal chord progression, but listen between the lines and "Awakened…" is as intuitive as it is crafted. It is only topped by the album's closing track, "Memories … a Raging River". Released as one of several pre-album singles, it never deviates from its creators' trademark squall, but emerges as a seven-minute encapsulation of everything that has made IMPERIUM DEKADENZ such a significant force in recent times. A simply brilliant black metal song that rips hard but hints at otherworldly potency, it relents from ghostly scything and slashing only as "Into Sorrow Evermore" reaches its terminus, with a delicate, crestfallen shimmer of melody fading to bitter black.