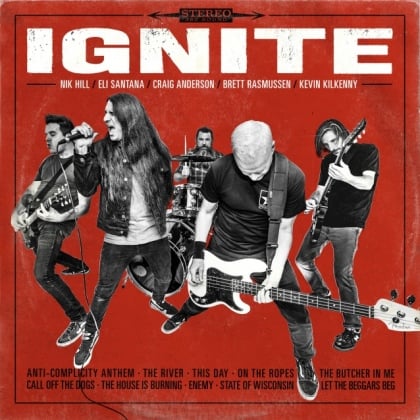 IGNITE's new self-titled album comes six years after the release of their previous full-length, "A War Against You". But the tangible excitement that radiates from "Ignite" makes the band sound like they never missed a day. Yet in that time, they underwent a major member change, with Eli Santana (HOLY GRAIL) taking over vocal duties. And while his style isn't much different from Zoltán "Zoli" Téglás, there is an infectious energy that Santana brings to the record. By self-titling a release that's more than 25 years into their career, IGNITE are clearly celebrating a new beginning.

"Ignite" is brimming with the charms of West Coast skate punk: quick tempos, group vocals and adrenaline-fueled, anti-establishment lyrics covered in major-key, California sunshine. Songs like "Anti-Complicity Anthem" and "This Day" are perfect examples of this, and it doesn't get much catchier than the ultimate toe-tapper, "The House Is Burning".

But there are more tense moments, too. Brooding tracks "Enemy" and "Let The Beggars Beg" give the album some depth without getting too morose. Sonically, "Call Off The Dogs" is the heaviest song, with Santana providing the only screaming part — and a damn good one — on the record.

Even with the changes in mood, "Ignite" never lets up its feverish momentum. Despite messages that confront topics like immigration and racial injustice with words like, "How many bodies in the river?" ("The River"),there is an underlying uplifting spirit beneath it all. The Orange County band's latest stimulating installment will surely satisfy old fans and capture new ones.