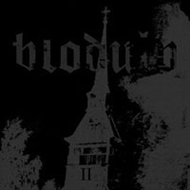 If you have not yet been exposed to the "Cruel Tanked Fucking Warfare" of Swedish black metallers BLODULV, then this re-release is a good place to start. (The album was original released by Total Holocaust Records and limited to 1,000 copies). Taking a BURZUM-esque style and twisting into their own hideous form, "II" scythes away with razor wire sharpness and the steady "subhuman bitchbeating" of Mr. Maachinaa (yes, it's a drum machine and it works just fine). Throwing pretense to the wind and warning the pretenders to stand clear, BLODULV expertly captures a little something called "feeling," injecting these seven iniquitous compositions with the kind of grimness and dread that can only come from deep within the soul and straight from a chemically altered brain.

What you get is a band that is unafraid to ride a primitive groove to Hell and back, but not at the expense of song variety. And by variety, we're not talking arrangement masturbation or needless forays into studio trickery. It is a basic matter of moving from up-tempo slammers like "Karmafrost" to the distortion plod of the nearly 10-minute "Tyrant". Switching from fast-paced hellfire to mid-tempo macabre majesty on "Stronghold" is more about knowing exactly the right place to turn the corner than it is about mindlessly incorporating change for its own sake. Galloping DARKTHRONE-ish fare is heard on "Desolate", while the seven-minute album-closing "With the Fist of Satan" is the album's most ominous march, a doomy crawl through the muck that is frightening in its malevolence. The latter song's closing minutes contain enough slithering misery and agonizing screams, courtesy of broken glass gargling vocalist Nekro, to blacken the purest of souls.

Fans of underground black metal primitiveness who crave a bit of hidden, albeit evil, grandness would do well to check out BLODULV. So what are you waiting for?