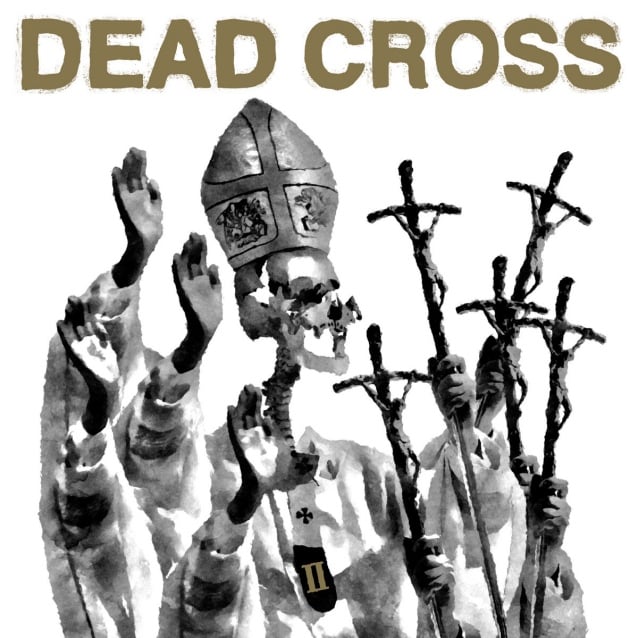 The first DEAD CROSS album was an absolute riot. With no lesser talent than Mike Patton slotting in to replace late, great, original frontman Gabe Serbian, alongside bassist Justin Pearson (RETOX / THE LOCUST),  guitarist Michael Crain (RETOX) and, most pertinently for metalheads, ex-SLAYER drummer Dave Lombardo, huge, twisted and unpredictable things were expected, and duly delivered. Five years on from that 2017 debut, DEAD CROSS still have the pedigree and the in-built unpredictability to ensure that "II" is every bit as hotly anticipated as its predecessor. The backdrop to all this, of course, is the impact of the pandemic: first, on the record's progress, and second, on Patton himself. The singer has spoken frankly about his battles with anxiety, agoraphobia and alcoholism, and "II" is more squarely anchored in relatable, real life than its predecessor as a result.

Not, of course, that these songs are in any way mawkish or lacking in venom. DEAD CROSS have conjured a very precise and electrifying hardcore punk response to the craziness, sickness and introspective horrors of the last few years. "II" shares plenty with the band's debut, but whether by design or as an inescapable evolutionary shift, these songs touch many more nerves. A profoundly creepy starting point, "Love Without Love" is a spidery, post-punk haze that builds to a series of frenzied peaks, with Patton delivering hooks and hostility with equal commitment. The bleak, industrial vibes continue on "Animal Espionage". With cavernous reverb, Lombardo's KILLING JOKE-like tribal drums and a mounting sense of panic, it's punk rock driven to the brink of emotional collapse.

There would be an outcry if DEAD CROSS didn't spend at least some of "II" hammering away like madmen, and both "Heart Reformer" and, in particular, "Reign Of Error" will scratch that bug-eyed thrash itch. It's still indecently exciting to hear Patton (and Pearson, whose voice is a lethally incensed presence throughout) gliding through the gears over Lombardo's fierce double-kicks, but brutal metal is really only a slender thread in this band's fucked-up tapestry. Riddled with the disquiet that surrounded their creation, songs like "Ants And Dragons" and "Christian Missile Crisis" are seamless collages of wonky ideas, wrapped around a twitching skeleton of heroically out-there punk and metal. And as you might expect, or possibly even demand, Patton is imperious from unhinged start to crackpot finish. From the gonzoid hardcore of "Nightclub Canary" to the melancholy schizophrenia of the closing "Imposter Syndrome", his vocal partnership with Pearson is often laugh-out-loud deranged.

An untamed triumph with a surprising emotional kick, "II" is yet more proof that music is the answer to just about everything.