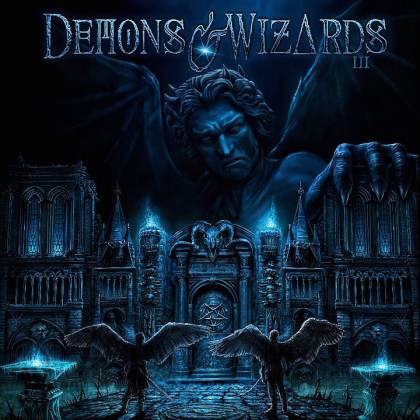 It was always a match made in heavy metal heaven, this eminently classy collaboration between BLIND GUARDIAN's Hansi Kürsch and ICED EARTH's Jon Schaffer. The two albums the duo released in the early '00s ("Demons & Wizards" in 2000, and "Touched by the Crimson King" in 2005) delivered exactly what this joining of forces promised: acres of Schaffer's precisely crafted and supercharged trad metal viscera, in perfect symbiosis with Kürsch's unique voice and endlessly dramatic lyrics. If DEMONS & WIZARDS felt like a big deal from the start, it's probably because it was — two masters at work, enjoying rare chemistry and flourishing in each other's creative glow. That said, 15 years is a very long time to wait for a follow-up.

No one could accuse either man of being less than prolific and permanently in go-mode, and BLIND GUARDIAN and ICED EARTH's respective catalogues and itineraries over that period go some way to explaining why "III" has taken so many years to emerge. But still, 15 years in the making or not, this feels like a big deal all over again, and anything less than another monstrous display of metal mastery would feel like an excruciating anticlimax. Fortunately, neither Kürsch nor Schaffer have ever been in the business of half-arsing their music: "III" is every bit the monolith to epic, dynamic and fervently melodic heavy metal that diehard fans will be anticipating. It's also easily the most diverse of the three DEMONS & WIZARDS albums so far, with seamless detours into progressive and classic rock territory contrasting beautifully with some of the duo's most brutal songs to date.

Opener "Diabolic" has already done the rounds, and it's hard to imagine anyone being disappointed by its sheer belligerence and glowering splendor. As always, the riffs and structures are unmistakably Schaffer's, but there's far more nuance and subtlety here than on any ICED EARTH record. "Invincible" and "Wolves In Winter" offer gritty, muscular upgrades on the D&W sound; "Final Warning" and "Dark Side Of Her Majesty" edge toward a more old-school prog-meets-thrash metal vibe; "Midas Disease" is like some hellish tribute to AC/DC and ACCEPT, built around gleaming, oh-so-classic riffs but firmly in the shadows, both sonically and spiritually.

The most compelling evidence of Kürsch and Schaffer's harmonious partnership can be found on the album's two towering epics. Both "Timeless Spirit" and "Children Of Cain" employ acoustic guitars, oceans of reverb and a fluid sense of episodic evolution to bombard us with yet more sublime melodies. The former begins as an almost psychedelic reverie, Kürsch's skewed harmonies swirling, before disarming Floydian drift morphs into a thunderous, none-more-metal refrain (and back again). The latter is easily the most startling and irresistible thing DEMONS & WIZARDS have conjured to date. It's a bewitching tale of a Dystopian death cult, sung with maximum conviction by the ever classy Kürsch. It brings the sardonic jangle of prime JETHRO TULL together with the ornate bombast of URIAH HEEP, but with several metric hell-tons of cutting-edge metal power erupting at infrequent intervals. As a single piece of music, it's breathtaking. As the climax to the biggest, boldest and most wickedly entertaining DEMONS & WIZARDS album yet, it's pretty much perfect. We can only hope that the next album arrives earlier than 2035 because the world definitely needs more of this.